A project to develop a unique ammonia-fueled tanker took an important step forward receiving Approval in Principle from DNV and clearing the way for the project to proceed to design. The project, which received funding a little over a year ago, is being pursued in partnership between LMG Marin, Wärtsilä, and Grieg Edge targeting the introduction of the first ammonia tanker by 2025.

“Getting the approval was not unexpected, but still something we are happy to announce,” said Nicolai Grieg, Head of Grieg Edge, a dedicated innovation unit within the Grieg Maritime Group. “It is a major milestone in getting one of the first green ammonia fueled vessels in operation.”

The ammonia project was awarded $5.1 million in December 2020 by Pilot-E a Norwegian government funding scheme to support innovation projects. The goal is to develop a green tanker with the project name of MS Green Ammonia to distribute green ammonia from a planned factory in Berlevåg to various locations and end-users along the coast. A group of Norwegian companies intends to use wind from Raggovidda to produce green ammonia which the tanker will transport and use for its power. The project at its inception established several Letters of Intent (LOIs) with several industrial partners. 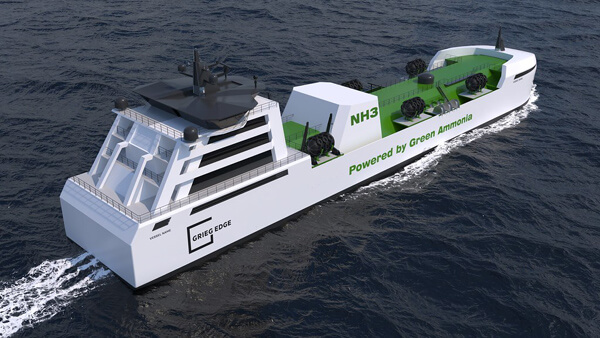 When the project began, the companies said that the final design, size, and volume were all elements that are dependent on the market and end-users. Reaching the AiP stage they have now defined the tanker as approximately 394 feet in length with a cargo capacity of 7,500 cubic meters of ammonia. It will be able to load up to 1000 cubic meters per hour. The engine will be a Wärtsilä W25DF ammonia engine and the tanker will also be able to handle ship-to-ship bunkering.

Receipt of the AiP from DNV the companies said, “means that the design we have developed with LMG Marine is feasible. No significant obstacles exist to prevent our concept from being realized.”

The next steps will be to further detail the ship’s design and initiate the yard tender process. “Technically, we are ready to realize the project in 2025,” Grieg said in detailing the plans. “We continue to work on the commercial aspects, developing the value chain and getting end consumers to commit.“

The MS Green Ammonia is part of the larger Berlevåg-project in the north of Norway and is viewed as a demonstration of the potential for ammonia. The project is a result of the ZEEDS initiative (Zero Emissions Energy Distribution at Sea) and the first initiative from Grieg Edge.