Protests are continuing around the world against tankers carrying Russian oil and energy products as the assault on Ukraine rages on. Environmental activists from Greenpeace became the latest to target the tankers taking separate but related actions in Rotterdam, Antwerp, Denmark, and New York yesterday and today. They are joining with longshoremen who have already refused to work vessels coming from Russia with reports of the local protests continuing to expand and Greenpeace launching a tracking tool to aid in following the movement of the ships.

Since March 18, Greenpeace activists have launched a series of protests across the Nordic region targeting both Russian flagged tankers as well as international vessels that they have identified as transporting Russian energy products. On Sunday, protestors in Denmark took to a small boat armed with cans of white paint and came alongside the 111,000 dwt supertanker Delta Pioneer. They videoed their efforts at painting the words “oil is war” on the hull of the massive tanker which they reported offloaded its cargo but has been at anchor since March 1.

At the same time, in Rotterdam, they met the 112,800 dwt tanker Waikiki which is registered in Malta and was arriving from Russia. Greenpeace said the tanker was carrying 100,000 tonnes of crude oil from Russia. In Antwerp, they also targeted the 117,150 dwt Liberia-flagged tanker SCF Baltica which they reported as carrying 85,000 tonnes of fuel oil from Russia. Protestors took to small boats holding up banners against the war and in two instances swimmers were seen in the water in front of the massive tankers.

Mads Flarup Christensen, Executive Director of Greenpeace Nordic, spoke representing the group saying, “While people suffer in Ukraine and people in Russia take to the streets pleading for peace, Putin’s oil and gas is still arriving at European ports, contributing to his war chest. Supertankers crossing our seas with Russian oil and gas are still delivering fossils to Europe. If we want to stand for peace, we must stop this and urgently get off oil and gas.” 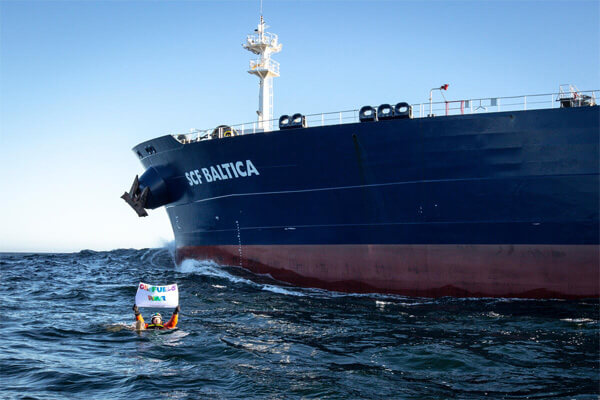 In New York, Greenpeace volunteers also targeted the product tanker Minerva Virgo. The 50,900 dwt chemical tanker registered in Greece was anchoring in Ambrose Bay on Sunday. The Greenpeace boat circled the tanker but the U.S. Coast Guard told local media that they did nothing illegal and were not stopped. Another vessel the 71,000 dwt Confidence registered in Liberia was also highlighted. Greenpeace says it is loaded with a shipment of Russian crude contracted to Phillips 66, with the company telling local media that it was abiding by the sanctions.

Many of the tankers are believed to be rushing to ports attempting to offload their cargo and meet contracts before the sanctions go into effect in April. However, in the meantime, longshoremen in individual ports have refused to work the vessels. In Canada last week and then Maine, a tanker reported to be carrying Russian fuel was denied berths with local officials only saying that it was for a series of reasons. The vessel was said to be searching for a port.

Nordic P&I Group reported at the end of last week that the Swedish Dockworkers Union has given notice of their intent to start an industrial action against ships going to and from Russia as well as Russian cargo in all Swedish ports. “Swedish dockworkers will not handle any ships going to and from Russia, ships carrying Russian import and export cargo and vessels registered as Russian,” the group wrote in an alert.

Vowing to continue to target and highlight the movement of Russian oil, Greenpeace UK launched a tracking service. They are reporting that they identified at least 189 supertankers carrying oil and gas from Russia since the start of its invasion of Ukraine on February 24th, with 88 of them headed to Europe. 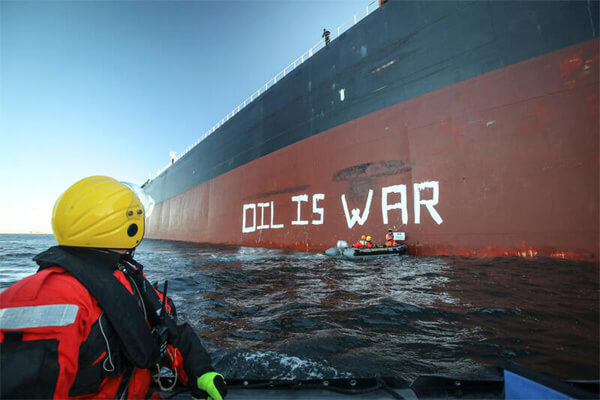