A group of green companies working together all along the shipment process is claiming the honors of having completed the world’s first carbon neutral-certified container shipment. From the exporter to the port and the distributor each of the companies working in the logistic process was environmentally certified.

“It’s such a source of pride for us that Contecon Guayaquil S.A., concessionaire of Guayaquil’s public port, has achieved this milestone, and that it has been the first to do so,” said Ecuadorian Minister of Transport and Public Works Gabriel Martínez. He also highlighted the $170 million of investment being made in the port operations along with the extension of the port concession for an additional 19 years.

The shipment of Ecuadorian bananas came from TropicalFruit, an Ecuadorian company exporting tropical fruits. The company places an emphasis on environmental preservation, social responsibility, health, and safety. They have been certified as carbon neutral since 2015.

The container was loaded by Contecon Guayaquil (CGSA) at the Port of Guayaquil in Ecuador. By adhering to the principles of environmental stewardship and through the use of clean technology, CGSA became the first port operator in the Americas to obtain ISO 14064 carbon neutral certification from TUV Rheinland. CGSA’s certification and compensation process was performed locally by Sambito S.A. 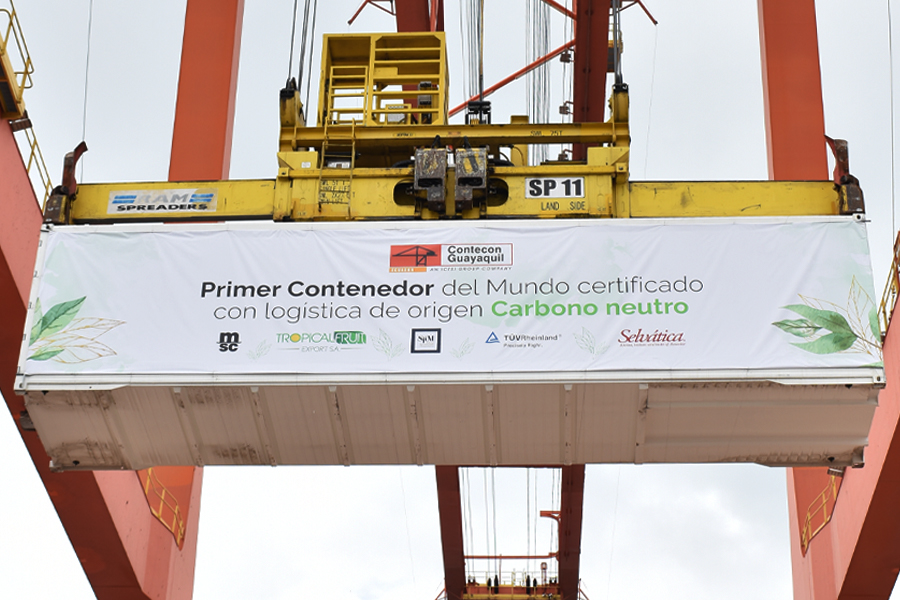 CGSA loaded the container on the Antwerpen-bound vessel MSC Geneva. While the shippers did not discuss the issues of carbon emissions from the containership during the voyage to Europe, MSC does offer customers carbon offset programs.

The bananas shipment’s destination was France where it was distributed and marketed under the SIIM brand Selvatica. Societe International d’Importation (SIIM), a French wholesale distributor of fruits and vegetables, is also certified carbon neutral and since 2014 has also been developing sustainable agriculture through its foundation.

While it was a smaller milestone in the global efforts to decarbonize, the companies said it demonstrates how exporters can certify their supply chain processes to achieve greater competitiveness in the most exacting markets and at the same time be in compliance with global regulations to successfully meet consumer demand for products from sustainable processes.