The U.S. Bureau of Safety and Environmental Enforcement’s SafeOCS program has released its 2017 annual report on Blowout Prevention System Safety, noting 18 of 25 operators associated with rig operations in the Gulf of Mexico (GOM) reported 1,129 equipment component failure events. The reported events occurred on 45 of the 59 rigs operating in the GOM during the year. 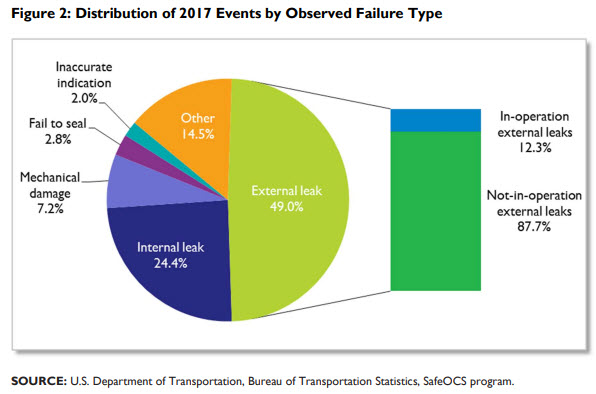 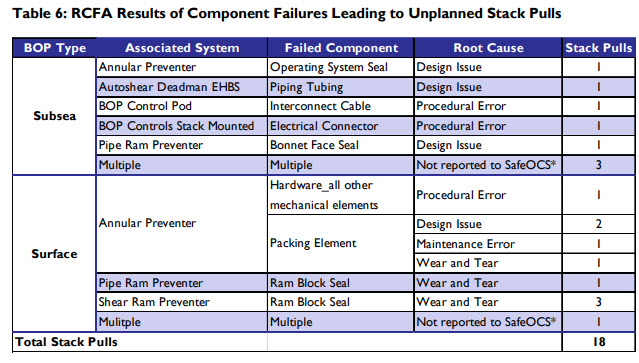 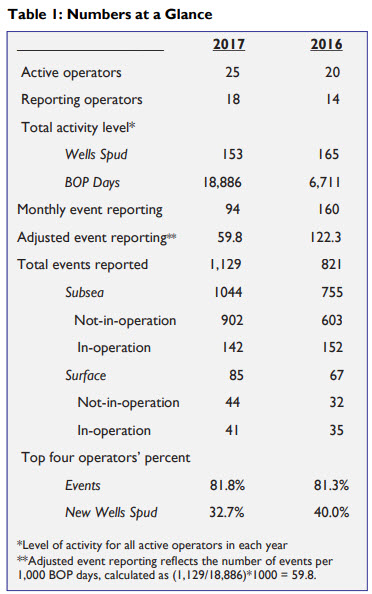 There were 1,044 subsea events (92.5 percent of total events) reported to SafeOCS, approximately the same percentage as reported in 2016 (91.8 percent of total events). Of those events, 86.4 percent occurred while not in operation (i.e., on deck, during deployment or during retrieval), an increase in not-in-operation events from 2016 to 2017. Of the in-operation events, eight led to stack pulls, and one of the eight resulted in a loss of containment event involving synthetic oil base mud (drilling fluid).

Surface BOPs perform the same functions as subsea BOPs but are less complex and tend to have fewer components. In addition, the equipment is readily accessible on the platform for installation and maintenance activities. Surface BOP stacks are normally used on fixed platforms, jack up rigs, spar platforms, and tension leg platforms. 17 of the 45 rigs (37.8 percent) had surface offshore BOP stacks. However, surface stacks account for just 7.5 percent of the failure notifications.

85 equipment component events occurred on surface BOP stacks in 2017. Of those, there were 44 events while not in operation, 41 while in operation and 10 stack pulls. The percentage of failures occurring while not in operation was higher for subsea stacks (86.4 percent) than on surface stacks (48.2 percent). This reflects the common field practice of conducting more thorough predeployment testing and maintenance on subsea stacks as compared to surface stacks.