On Friday, the crew of the Dutch freighter Dolfijngracht rescued ocean rower Niall Macdonald off the coast of Cape Cod after his rowboat began taking on water.

At 0030 hours on Friday, Macdonald activated his EPIRB and called watchstanders at the UK Mission Control Center via satphone to report that his vessel was in distress. He said that after 36 hours in rough seas, his ocean rowboat had taken on water. Macdonald elected to abandon ship onto his inflatable liferaft.

UK Mission Control contacted the U.S. Coast Guard First District based in Boston to relay Macdonald's message and to coordinate a rescue. The USCG sent out an alert to merchant vessels near Macdonald's position to request assistance, and the Canadian Rescue Coordination Center out of Halifax launched a C-130 SAR aircraft to provide assistance. In addition, the Italian Navy warship Alpino was about 80 nm from the scene, and the MRCC Rome diverted her to the scene.

"The search and rescue cooperation between the United States, United Kingdom, Canada, Italy, and the Netherlands resulted in saving this mariner's life," said Timothy Carton, a search and rescue mission controller for the First Coast Guard District. The Coast Guard credited Macdonald for carrying a full complement of emergency equipment aboard, which likely increased his odds of survival.

"I have nothing but gratitude and admiration for the crew of [the Dolfijngracht] for their actions on the night of my rescue. I'm still amazed that they managed to get me onto the ship from the liferaft at all given the conditions at the time," Macdonald said in a statement. "Their actions that night are to be commended and I will never be able to thank Captain Goorden and his crew enough for what they did." 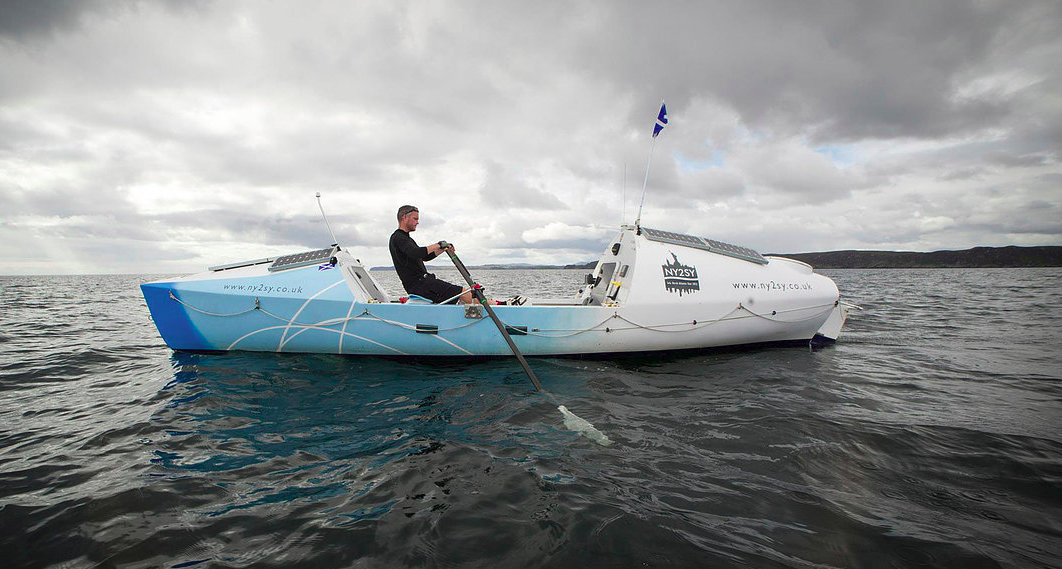 Macdonald was attempting to row the 3,400 mile distance between Virginia and Scotland in his purpose-built craft, the Alba, in order to raise money for a charitable cause. It was his third attempt at the challenging voyage: his first ended when he broke his back in rough seas, and his second had to be canceled due to rough conditions. For this attempt, Macdonald had relocated his starting position from New York to Norfolk, Virginia in order to seek fair weather.

The Alba features cabins forward and aft for storage and shelter. Macdonald reported in his after-accident account that he had opened the shelter's hatch in order to examine storm damage on deck when a wave washed over the boat, pouring through the open hatchway and swamping the interior.