On Friday afternoon, Hurricane Isaias strengthened as it made its way north towards Florida. The National Hurricane Center now expects that hurricane conditions along parts of Florida's east coast will begin Saturday, and it has issued a hurricane warning for the region.

At PortMiami, Coast Guard captain of the port Capt. J.F. Burdian announced Friday that she will set port condition "Zulu" - closed - at midnight August 1. By that time, all terminals must close, operations must cease, and all oceangoing vessels over 500 GT must depart unless specifically authorized.

At Port Canaveral and Port of Jacksonville (Jaxport), the Coast Guard has set port condition "X-Ray" in anticipation of tropical storm force winds within 48 hours. Both ports remain open for now. 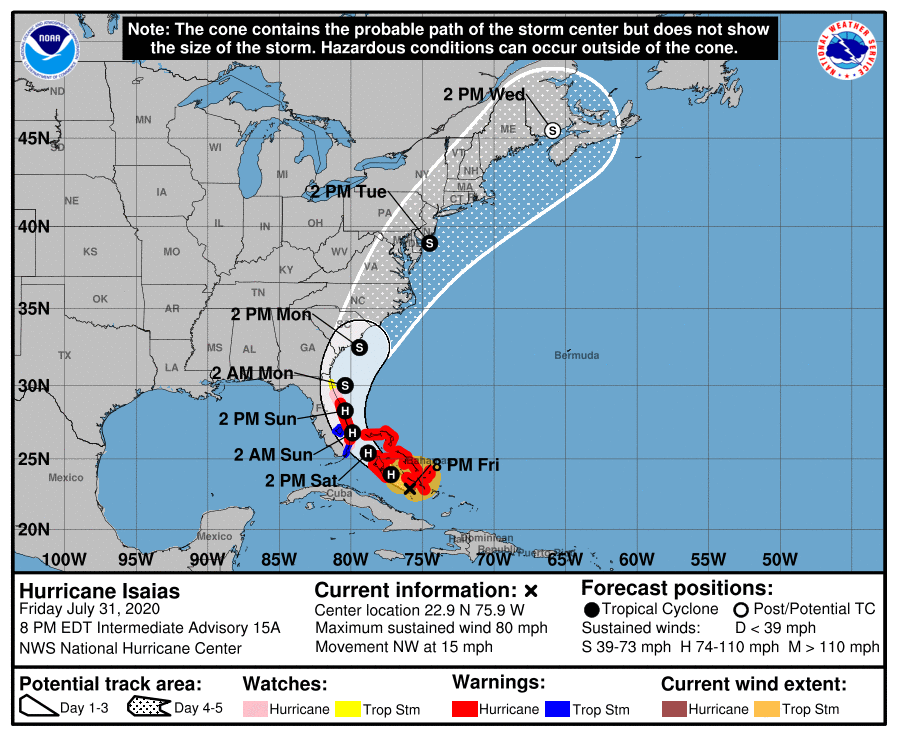 Storm surge may be a risk in low-lying areas, and the National Hurricane Center is forecasting a surge of two to four feet in affected areas of the Florida coastline.

Further north, the U.S. Coast Guard has also asked ports and mariners in Virginia and Maryland to get ready for the arrival of tropical storm force winds within 72 hours. The storm is expected to weaken, but it may approach the mid-Atlantic states on Monday or Tuesday.

Affected ports in Virginia and Maryland are currently open to commercial traffic, and all cargo operations may continue for now. However, all oceangoing tugs, barges and vessels over 500 GT must report their plans for departing port or remaining to the local captain of the port within 24 hours. If tropical storm force winds approach, vessel movements will be restricted, and all movements will have to be approved by the captain of the port.