A first LNG bunkering trial has been completed at the Port of Kobe, Japan.

The bunkering of the LNG-fueled tug Ishin was organized by the Kobe City Port and Harbor Authority. Ishin is owned by Mitsui O.S.K. (MOL) and operated by Nihon-Tug-Boat. MOL Marine provided consulting services for the trial.

LNG fuel for the trial was hauled by truck from the Himeji LNG Plant, and the bunkering was done via a truck-to-ship system at Kobe Port’s Shinko Pier No.4.

Ishin was built by Kanagawa Dockyard and is the first LNG-fueled tugboat in western Japan and the first in Japan to conform to the IGF Code. She is powered by two advanced 6EY26DF dual-fuel commercial marine engines manufactured by Yanmar and features a removable LNG fuel tank mounted on the exposed deck at the stern of the ship. This is designed to enhance convenience in bunkering, maintenance and inspection. 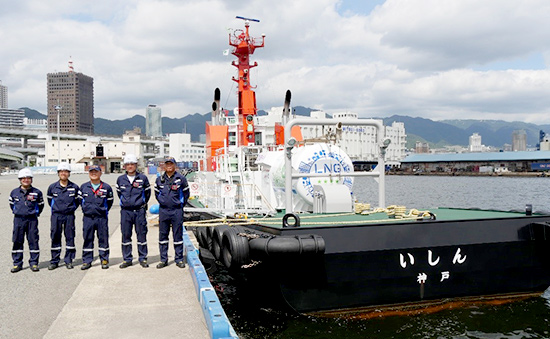