With work accelerating throughout the offshore wind sector, additional milestones are being reached as new projects push forward. The latest to announce key developments is the Hywind Tampen floating wind farm in Norway, which will be the largest floating offshore wind farm when it goes into service later this year and is also viewed as a test bed for further development of floating wind.

To be located nearly 90 miles off the coast of Norway, the wind farm will consist of 11 Siemens Gamesa wind turbines producing 88 MW, which will be 35 percent of the annual electricity power demand for the five offshore oil and gas platforms which will be powered by the wind farm. While it is a smaller capacity wind farm, it will be the first to supply offshore platforms and expand the expertise in floating technologies.

Wergeland Group, which is responsible for the assembly of the components, announced that last week the first wind turbine finished assembling at Wergeland Base located in southwest Norway. The first completed assembly was towed to the testing area in Fensfjord. In the next phase, it will be towed out to the site.

At the same time, the second structure arrived in the Fensfjord and is waiting to be towed into Wergeland Base. Key components are being staged in Fensjord with assembly at the company’s nearby plant. The first of the 11 turbines began arriving at the base in Gulen, Norway at the beginning of March 2022. 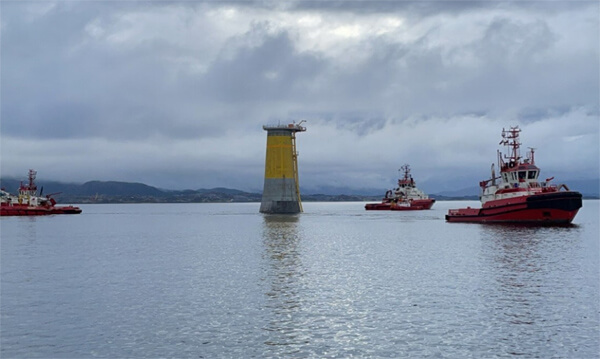 “We plan to start towing the completed wind turbines to Tampen in early summer and complete the offshore work by the end of the year. This is a large and complex industrial project where we are using our experience from oil and gas projects,” said Olav-Bernt Haga, Equinor’s project director for Hywind Tampen.

Offshore work on the wind farm has also recently begun. They started the transport and installation of the suction anchors at the site in April using the subsea AHTS vessel Skandi Skansen.

Water depth at the location ranges from 850 feet to nearly 1,000 feet. The turbines are being mounted on floating concrete spar substructures with shared anchors supplied by Aker Solutions.