First Ferries in Denmark to Sail Entirely on Biodiesel

As the maritime industry continues to take steps toward decarbonization, the ferry segment has been one of the pioneers demonstrating new approach. The belief is that ferries can serve as a proving ground and model to help the expansion of decarbonization strategies.

Denmark’s Molslinjren ferries are becoming the first in the country to entirely convert to fossil-free fuel. Converting two older ferries to biodiesel, along with the introduction of an entirely electric ferry, will permit the line to reduce carbon emissions by up to 96 percent compared to sailing on regular marine diesel fuel.

“It is our aim to operate ferries that no longer emit CO2 on their routes. Even though it’s just the beginning, we are happy to now have reached the phase of testing HVO biodiesel for one of our ferry routes, as it’s a step in the right direction towards our ambition of transitioning to sustainable fuels," says Carsten Jensen, CEO of Molslinjen.

The initial tests began earlier this year on two 164-foot-long ferries built in 1998. The Fenja and Menja each transport up to 396 passengers along with 35 cars and 60 bicycles. They operate on a route from the Danish port of Esbjerg to Nordby on Fano island. It is a 12-minute run operated regularly throughout the day.

Based on the success of the biodisel test, the company is beginning a conversion to the fuel starting this month. They plan to scale up the HVO biodiesel throughout the fall. The biodiesel will be manufactured by the Finnish company Neste Oyji and supplied by Bunker One. In addition to supporting its own carbon reduction plan, the line hopes to encourage growth in the production and use of biodiesel.

The line plans to complete the decarbonization of this route in the fall with the introduction of the Grotte, an electric ferry built in Poland and currently completing outfitting and trials. The electric ferry is the same size as her two older running mates with additional capacity for cars. It will enter service by October 2021. 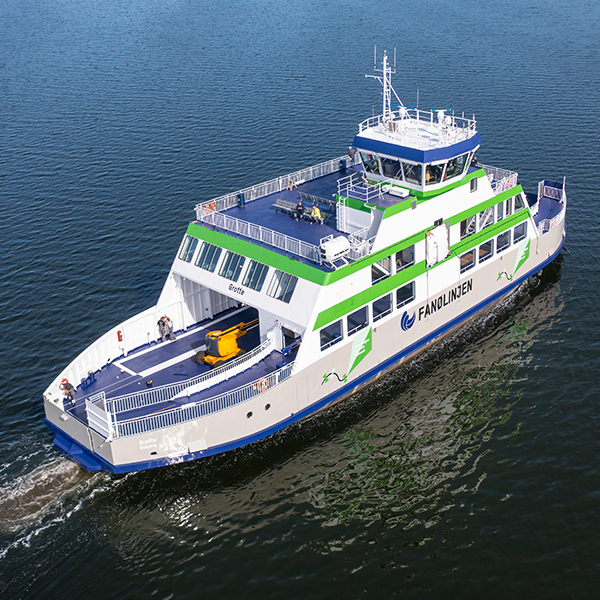