Global shipping company FedEx long ago had an advertising slogan “When it absolutely, positively has to be there....” and the company is taking that to heart signing a new agreement with California’s Port Hueneme to help its incoming container shipments avoid congestion at Southern California’s main ports. FedEx and the port are planning for one chartered ship per month for the next three months carrying FedEx containers.

“FedEx Logistics is thrilled to collaborate with everyone at Port of Hueneme as we put our collective strength and expertise together to create a value-added solution for our customers while helping to alleviate pressure at the ports of Long Beach and Los Angeles,” said Udo Lange, President & CEO, FedEx Logistics.

The first vessel is due to arrive at the port at the end of January after departing Port Humen, China on January 4. The chartered vessel, which has a capacity of 300 53 ft. containers per sailing, is reported to be carrying 183 containers on its first voyage. According to FedEx and port officials, the ship is loaded with electronics, automotive parts, and garments, as well as general department store merchandise, essential items that will get to the store shelves quickly. The port expects that the containers will leave the port within 48 hours of the vessel’s arrival.

The second vessel chartered to transport FedEx Logistics’ containers is expected to depart China around the end of the month. It will be followed by a third charter trip approximately a month after that. The port’s chief operations officer, Christina Birdsey, told the Ventura County Star newspaper that the subsequent vessels could be carrying upwards of 250 containers on each trip. 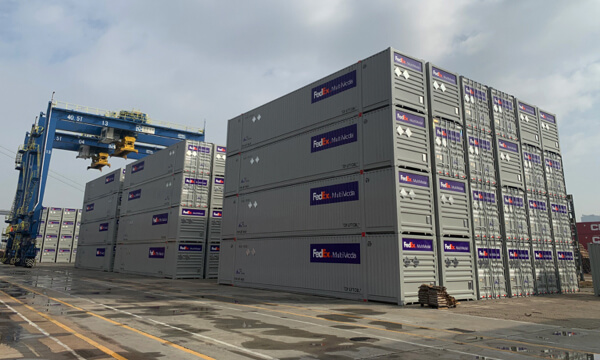 The port, which calls itself the fourth largest container port on the West Coast, began receiving containerships in 2021 promoting its facilities as an alternative to the congested southern California ports. Del Monte and Maersk have also sent ships into the port as well as vehicle carriers.

“Our long-standing joint use agreement with Naval Base Ventura County is the foundation of a dynamic partnership used to create solutions like these while increasing operational efficiency in the maritime industry,” said Commissioner Jason Hodge, President of the Oxnard Harbor District that owns the Port of Hueneme.

Port of Hueneme executives explain with the agreement with the Navy and Naval Base they have been able to use wharves in the port for the commercial vessels. They are using available space within the port to handle the containers without disrupting normal operations.

The creative solution provided by Port Hueneme continues to be important with the persistent backlog in the ports of Los Angeles and Long Beach. The Marine Exchange of Southern California reports there are 90 containerships with reservations currently slow steaming toward the twin ports with nine more in the anchorage. “A big 44 vessels of all types are scheduled to arrive over the next three days, which is a big eight more than the ‘normal’ level of 37 based on 2018/9 levels pre-COVID levels,” reported Captain Kip Louttit, Executive Director of the Southern California Marine Exchange. He notes that this includes 17 containerships scheduled to arrive over the three-day period. 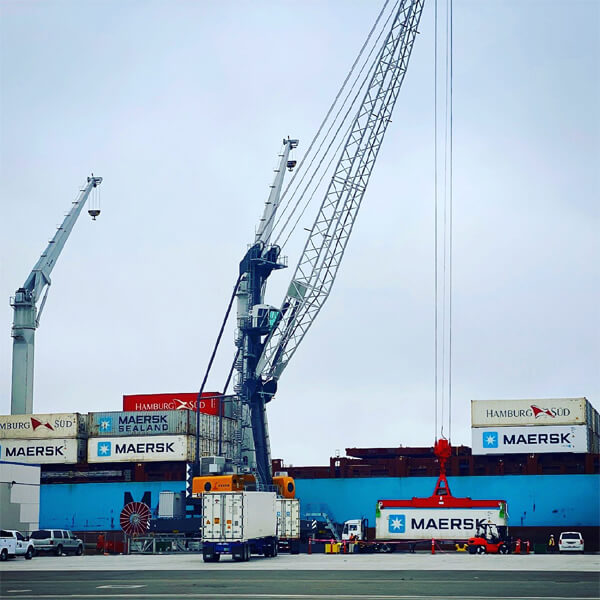