Wind assisted propulsion is continuing forward as one of the technologies being explored to improve operating efficiency and the environmental performance of the shipping industry. In the latest example, a Dutch flagged general cargo ship began testing a new installation of two new compact fixed-wing units that can be easily moved into position or stowed.

The Frisian Sea, a 6,477dwt general cargo vessel. Made its maiden voyage to Vasteras, Sweden with the VentiFoils in operation. Owned by Boomsma Shipping, the eight-year-old vessel, which measures 388 feet in length, was retrofitted with the wind technology as part of a pilot program with eConowind. The installation was completed during a port call in Harlingen.

During the first voyage the Ventifoils were deployed and they also stowed them during the loading of the vessel. Start-up tests commenced on the systems and in the coming months they will be training the crew while optimizing the system and operations. 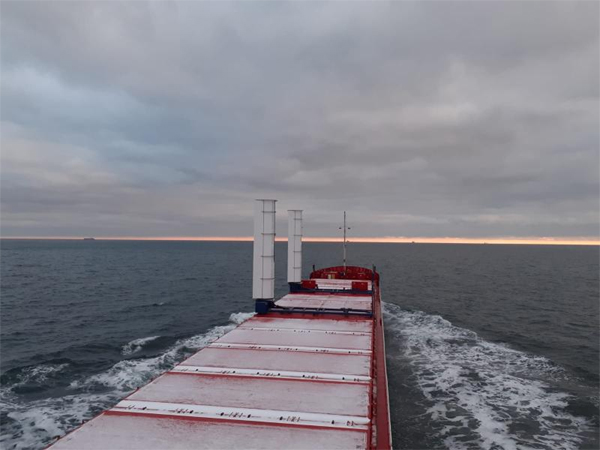 Tessa Remery, project coordinator, explains, “With the help of the Wind Assisted Ship Propulsion (WASP) project, part of the EU Interreg North Sea region program, we will now test the performance during the coming two years. This innovative technology has to work in our daily operations with various wind conditions.  We hope to find savings to be in the region of 10 percent.”

The VentiFoils (Wind Assisted Ship Propulsion Units) are designed as optimal compact (non-rotating) wing profiles, creating superior thrust by means of the principle of boundary-layer-suction, for which ventilators are mounted inside the VentiFoils. Due to the generated thrust by the unit, the thrust of the propeller can be reduced to maintain the same speed leading to fuel savings and emission reductions.

“The installation of the Flatrack solution was relatively easy,” said Ton Boomsma, co-owner and CTO of the company. “We now expect they will give optimal results on our ship. Once the crew gets some experience, we expect no trouble in handling the systems using our hatch cranes.”

One of the elements of the Flatrack design is the flexibility of a container, being movable by the hatch crane. It also needs limited installation time and has the possibility for use on several vessels.  With this system, the units can be positioned just in front of the superstructure during loading. 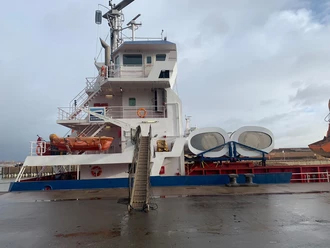 Based on the experience with the Boomsma prototype, eConowind expects to make the product available to a broader range of vessels.

The WASP (Wind Assisted Ship Propulsion) project was funded by the Interreg North Sea Europe program, part of the European Regional Development Fund (ERDF) and brings together universities and wind-assist technology providers with ship owners to research, trial, and validate the operational performance of a selection of wind propulsion solutions.