Results from Southern California’s ports continue to show the impact of the coronavirus on global trade. However, the ports of Los Angeles and Long Beach while located in proximity to each other showed differing results and outlooks for activity in the near term.

Cargo shipments rose at the Port of Long Beach in May as the economic effects of COVID-19 started to subside. While the port’s volume in the number of TEUs moved is down nearly 6 percent for the year, the port reported a 9.5 percent increase in TEUs to 628,205 in May 2020 versus the year earlier. The Port of Long Beach reported increases in imports (7.6%), exports (11.6%), and empty containers (11.4%) heading overseas.

“Our strong numbers reflect the efforts of our Business Recovery Task Force, which is setting the path for efficient cargo movement and growth,” said Mario Cordero, Executive Director of the Port of Long Beach. “Our focus on operational excellence and world-class customer service will continue as we prioritize our industry-leading infrastructure development projects.”

As part of its recovery efforts, the Port of Long Beach has activated an internal Business Recovery Task Force that works with customers, industry partners, labor, and government agencies to ensure terminal and supply chain operations continue without disruption, along with expediting shipments of crucial personal protective equipment.

“We aren’t out of the woods, but this is the gradual growth we have anticipated as the United States starts to rebound from the devastating economic impacts of COVID-19 and the trade war with China,” said Long Beach Harbor Commission President Bonnie Lowenthal.

Contributing to the port’s positive outlook was the fact that May was the first month in which cargo shipments rose after seven consecutive months of declines that port officials attributed to the U.S.-China trade dispute and the COVID-19 epidemic. They believe the increases can be attributed to a rebound in Chinese that manufacturing along with increasing demand for furniture, digital products, and home improvement goods in the United States.

As another indicator of a rebound, the Port of Long Beach highlighted a new North American record for the highest volume of container movements during a single call as longshore workers at Total Terminals International handled a call by the MSC Sveva. Working seven ship-to-shore cranes more than 17,000 containers (over 30,000 TEUs) were transferred. 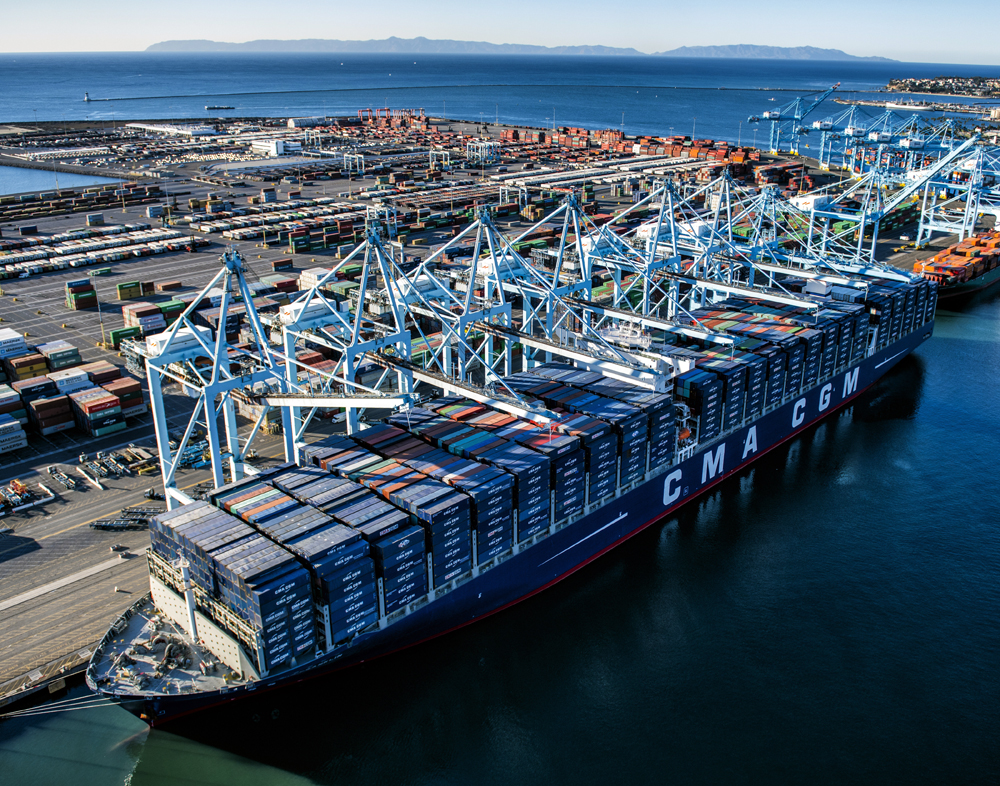 “Compared to last May’s historic volumes, the surge in canceled sailings due to COVID-19 and the trade war, along with shifts in liner services, all contributed to significantly softer volumes,” said Port of Los Angeles Executive Director Gene Seroka. “As the U.S. economy begins to recover, we expect fewer canceled sailings and an uptick in cargo compared to previous months.”

For the month of May, the Port of Los Angeles reported more than a 28 decline in imports as measured in TEUs moved while loaded exports dropped more than 37 percent. Empty containers declined nearly 30 percent in May.

The Port of Los Angeles is taking a conservative outlook for the future based on expectations of slower cargo volumes in the near term and a continued slowdown in the worldwide economy, due to market uncertainties related to the COVID-19 pandemic and the lingering impacts from the 2019 trade war.

“Given the unprecedented issues facing the world today and the immediate impact they have had on the economy, we are taking a decidedly conservative approach to formulating this year’s Harbor Department’s budget,” said Jaime Lee, President of the Los Angeles Harbor Commission.

With cargo volumes projected to be relatively soft through the first six months of FY 2020/21, the port approved a new budget that forecasts cargo volumes will decrease by approximately 15.6% versus its budget. The budget projects nearly an 8 percent year-over-year decrease in operating revenues.

Based on its outlook the Port of Los Angeles focused the priorities in its upcoming budget on infrastructure and capital improvement projects for the container and cargo terminals, promoting the efficient movement of goods, implementing systems to enhance security at the port, and continue work on projects improving public access to the waterfront.