One of the new technologies that is being developed is looking at how unmanned vessels can be used to expand capabilities and increase safety for the operators. A Singapore-based company, Zycraft, announced that it is developed unmanned fireboats.

According to the company, the market potential for small unmanned fireboats is great due to large populations and industries living in proximity to the water. They believe that an unmanned fireboat can provide enhanced readiness on a 24/7 basis while also optimizing the command and control of firefighting assets over a large area.

“Our unmanned fireboat will revolutionize the way waterborne firefighting is done” predicts James Soon, General Manager of Zycraft. He believes their system will lower operating costs for firefighting operations while keeping crews away from the frontline dangers of a fire. The company has recently completed Phase II engineering development of an unmanned fireboat measuring approximately 26 feet in length.

During Phase I trials that started in 2019 a firefighting system was installed on the company’s 56-foot Longrunner USV for tests and evaluation. During those tests, Zycraft proved its remote firefighting software algorithm and control of the USV to verify the proper protocols needed for effective unmanned firefighting. Using an Unifire Force 50 remote-controlled fire monitor installed at the bow, the Longrunner USV successfully navigated its way to a simulated boat on fire at sea and executed unmanned firefighting maneuvers around the boat. Using an electrically driven pump with 60 m3/hour flow rate, a shooting distance of 35 m was achieved. 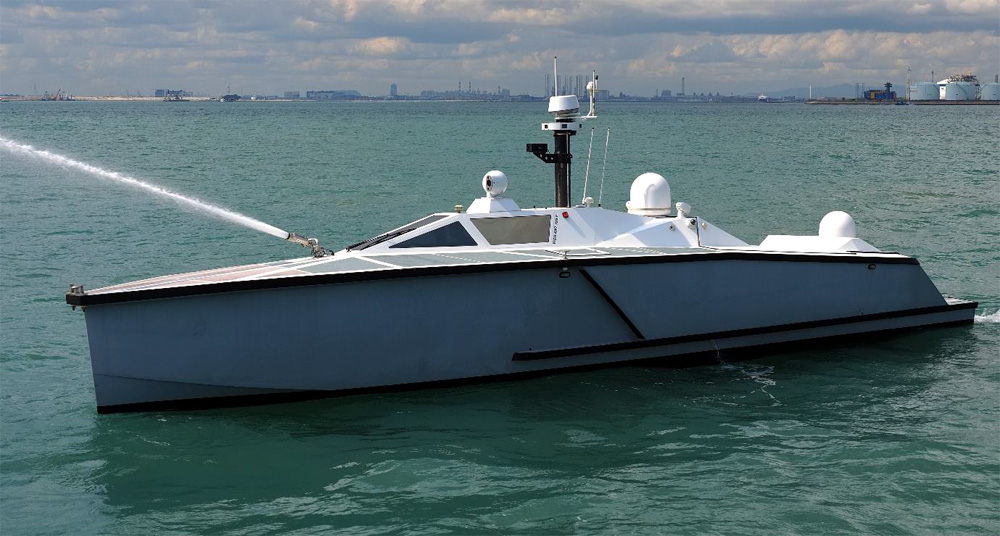 The fire-fighting software developed and patented by Zycraft enabled the USV to autonomously carry out surveillance around the simulated boat on fire while synchronizing the fire monitor’s water jet landing point with the USV’s electro-optic system. An operator at the command center focused on the fire fighting with a clear picture of the prevailing situation. This allowed the shore control center to decide where and when to commence firefighting operations.

The new 26-foot unmanned fireboat will have twin remote-controlled fire monitors each capable of over 200 feet in reach. One monitor will be installed on a telescopic mast for greater reach. An engine-driven fire pump provides 1500 gpm flow at 150 psi. The fireboat is powered by a single diesel engine and waterjet to give the boat a max speed of 35 knots. A drop-down thruster provides the heading precision needed during firefighting.

Zycraft is currently finalizing details for the construction of the first vessel to showcase to customers.