Royal Caribbean's Anthem of the Seas departed Cape Liberty, NJ for Port Canaveral on Saturday, with 4,529 passengers and 1,616 crew aboard. On Sunday, she entered a rapidly developing, severe storm with sustained winds to 65 knots and seas in the range of 30 feet, centered off the Carolinas.

Images posted by passengers aboard show overhead paneling torn free, chairs and stools tossed about the decks and planters shattered and spilled. “At 949 pm we had winds of 106 knots . . . and that wasn't even the worst of it,” tweeted Vinnie (@NYR230), who appended a photo of a cabin-mounted weather display as evidence: 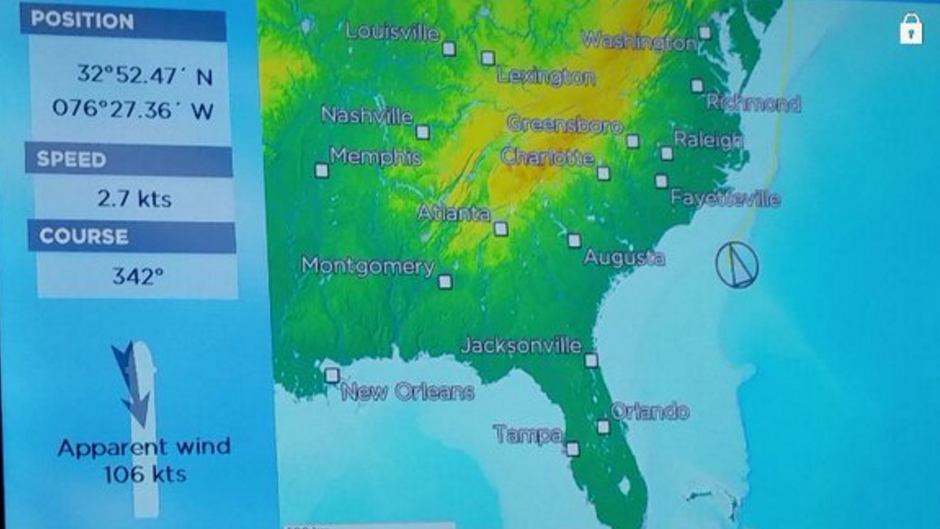 Passengers posting to CruiseCritic.com's message boards in real time reported that they were confined to their cabins beginning at 3:30 PM Sunday. The captain informed them that due to worsening conditions he would put the bow into the wind and ride out the storm at low speed.

The storm began to abate in the late evening, and by one in the morning the Anthem was under way again, passengers reported. A Royal Caribbean spokeswoman told Florida media outlets that the weather had delayed a planned noon arrival time in Port Canaveral.

In a sales point for satellite data and television service providers, the severe storm did not interrupt the ships' reception of Sunday's Superbowl coverage, nor its internet connection.

The "extreme wind and sea conditions" were not expected, and resulted in minor injuries for four passengers, said spokeswoman Cynthia Martinez. She did not elaborate on any damages to Anthem of the Seas.