Work began in Croatia on the first new cruise ship ordered since the shipbuilding and passenger shipping industries were impacted by the global pandemic. Being built at the 3.Maj facilities in Rijeka, the luxury yacht-style cruise ship is being constructed by MKM Yachts, a subsidiary of Scenic Group, an operator of ocean and river cruises and escorted land tours.

The construction program, which will also be the first new ship built at the yard in four years, represents an important step to relaunch shipbuilding in the area. Scenic had ordered this ship and a previously completed sister ship to be built at the Uljanik Shipyard in Pula, Croatia, but the shipyard had gone bankrupt during construction. Scenic was forced to take over the construction project managing the efforts to complete its ship. The first ship, named Scenic Eclipse, was completed in August 2019, a year behind schedule and with large cost overruns.  Work on the planned sister ship was delayed.

A unique business model has now been formed for the future construction projects. Under an agreement with the Croatian Government, they will use the existing infrastructure and knowledge of Croatian shipbuilders working in collaboration with Scenic's team. A newly formed company, MKM Yachts, wholly owned by the Scenic Group, will take responsibility for Scenic’s new ocean ship builds. The shipbuilding operations will be conducted in a dedicated separate section of the existing Maj 3 Shipyard.

“The Croatian Government has committed to supporting the redevelopment of the shipyard and assist in the funding of our new building program, which will comprise five custom-built vessels over the next six years,” said Glen Moroney, owner and chairman of the Scenic Group.

Work on the new ship, Scenic Eclipse II, began in late April 2020 with a steel cutting ceremony attended by the executives wearing protective facemask because of the coronavirus. 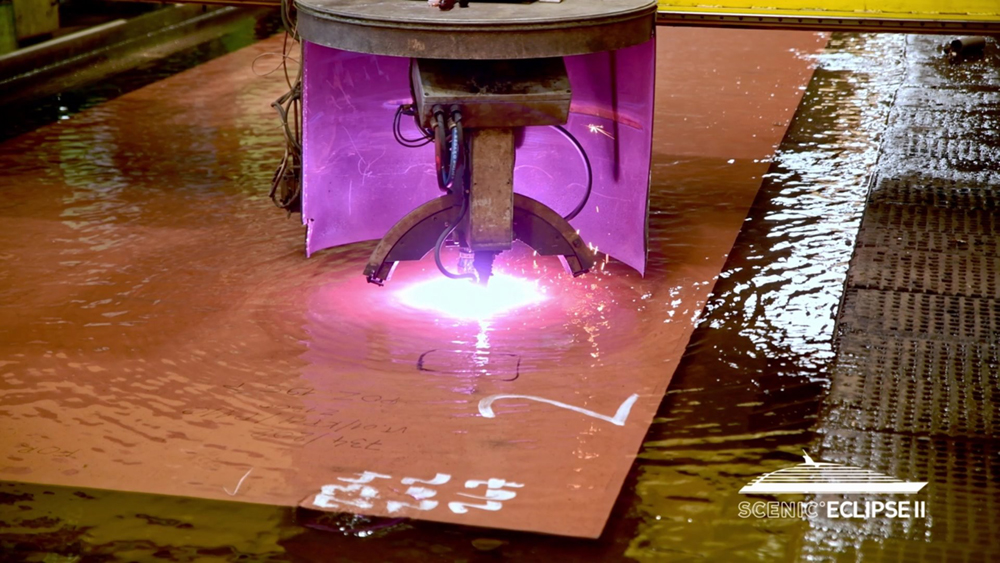 Scenic says the exterior design of its ships is inspired by the sleek contours of a sailing yacht. Each Scenic ocean ship accommodates a maximum of 228 guests (200 in polar regions) and has amenities including a helipad with two six-guest helicopters and a six-guest submarine capable of diving nearly 1,000 feet.

Scenic also announced that it plans to build four additional vessels over the next six years, but noted they made be different designs.