The ports of Southern California are making headway in reducing the congestion in container shipping. Despite the continued rush of imports from Asia to the U.S. West Coast ports, a better equilibrium in port operations is having a positive effect on the carriers and other ports.

Data from the Marine Exchange of Southern California, which oversees vessel traffic for the San Pedro port complex, shows steady progress reducing the number of vessels both in the ports and the anchorage. Currently, they are reporting that there are 90 ships in port, which is down from the 110 level experienced at the end of January 2021. The number of ships in port declined by eight on Saturday, March 13. On March 15, it was down to 89 ships in port, the lowest since December 25, 2020.

A more significant indication of the reduction in the congestion comes from the anchorage, which is at its lowest level since the end of February. At the end of January, the Marine Exchange reported that the anchorage was full and that they had opened for the first time since 2004 the drift areas where ships remained at sea outside the anchorage. 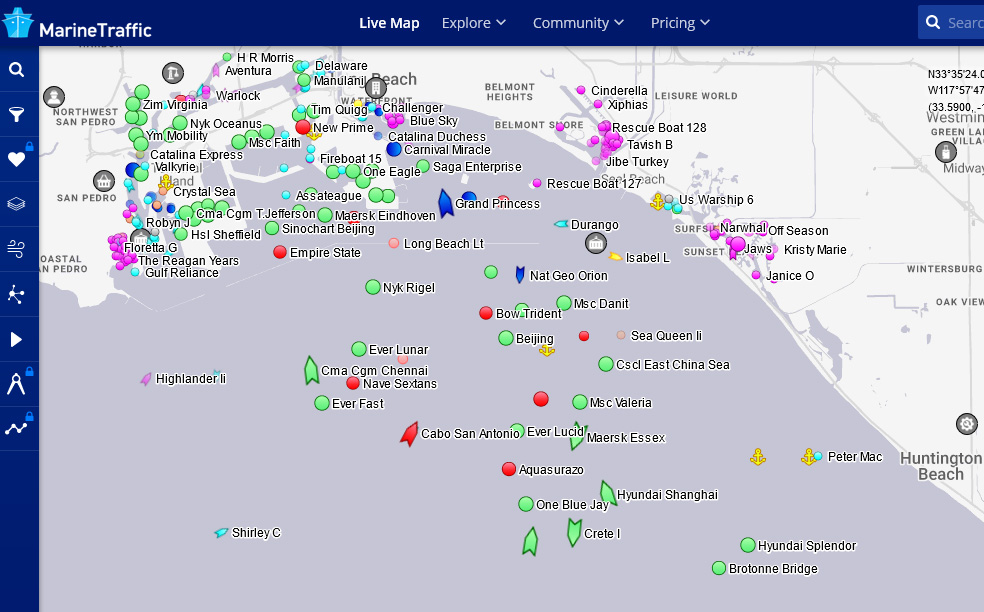 The status of the anchorage on March 15, 2021 (Courtesy Marine Traffic)

While average time in the anchorage remains high at just under eight days to get to a terminal at the Port of Los Angeles, some of the containerships are now actually arriving and going directly to berth. Of the four containerships due to arrive today, two were going to berth while the other two were entering the anchorage. However, there are also two ships in the anchorage currently, the Ever Far for 10 days and the Hyundai Shanghai for 11 days waiting to proceed to terminals in the Port of Los Angeles.

Volumes at the ports are expected to remain steady. The Port of Long Beach, for example, shows a flow averaging 18 containerships per week. Further, while the number of TEUs moved is projected to be down next week at the Port of Los Angeles, it is only a one week lull before volumes return to approximately 160,000 TEU. Volume is running some weeks 150 to 200 percent ahead of last year in Los Angeles.

The improvements at the Southern California ports are also being reflected to the north at the Port of Oakland. In January, Oakland said that vessels were skipping or missing calls due to delays in Southern California. The Port of Oakland, however, reported the declines in disruption helped it to achieve the highest month of February volumes in its 94-year history. Oakland moved over 80,000 TEUs in February with a 26 percent increase in import volumes. Some carriers have chosen to sail directly to Oakland to avoid the congestion in the southern ports.

Oakland officials said import volume has risen dramatically since last summer thanks to increased U.S. consumer spending and that forecasts continuing strong import volume through at least the second quarter of 2021. Asian factories they noted are shipping goods in record numbers to replenish American store shelves and assembly lines. Retailers, manufacturers, and e-commerce distributors are driving the surge, the Port said. However, export volumes were down in February with the Port saying that scarce vessel space hindered exporters attempting to ship cargo overseas.