Energy Observer, a French partnership that launched a total self-sufficient vessel powered by renewable energies and hydrogen as a demonstration laboratory, is now set to present its concept for a multipurpose ro-ro cargo ship fueled by liquid hydrogen that they believe can rapidly advance zero emissions in the shipping industry. Working with leading partners including the CMA CGM Group, Energy Observer says its technology allows zero-emission navigation while offering very high transport capacities and great autonomy.

The group launched their first vessel of the same name seven years ago as the first hydrogen-powered, zero-emission vessel to be self-sufficient in energy. The vessel has the first complete hydrogen chain, capable of producing its own hydrogen with its surplus of renewable energies. The goal was to serve as a laboratory for ecological transition serving as a demonstration for the technologies and transition of the shipping industry.

Along the way, they have been joined by some of the leading names in the shipping industry including CMA CGM as well as the naval architecture firm LMG Marin, Ayro, Air Liquide, and Bureau Veritas. The French Maritime Cluster and the T2EM Institute are working with academic, scientific, and industrial partners to create the Institute for the Eco-Energy Transition of the Maritime Sector (T2EM), and the Energy Observer 2 is the Institute's flagship, the first full-scale demonstrator to power the entire industry.

According to Energy Observer founder and president, Victorien Erussard, the technologies are now mature. He points to the research mastering liquid hydrogen storage as well as the deployment of liquefiers around the world, and the latest generations of mass-produced fuel cells. Energy Observer is focused on tackling the latest technological challenges, such as the integration of large tanks or the management of cryogenic temperatures, working with its partners.

"With this demonstrator ship, we want to go all the way in decarbonizing medium-sized industrial ships, using hydrogen directly as a fuel,” says Erussard. “We believe in the capacity of the French maritime industry to become an international model, benefiting from an agile and efficient research-industry ecosystem."

This new ship concept is being developed by the partnership focusing on the urgent need to renew the fleets of multipurpose cargo ships of about 5,000 tons deadweight. According to Energy Observer, the vessel can be used on intra-continental and coastal routes, those that represent an alternative to road transportation and can call at modest ports without heavy logistics. Constituting nearly 37 percent of the world fleet, they identified these vessels as a priority segment to accelerate the transition to zero emissions. 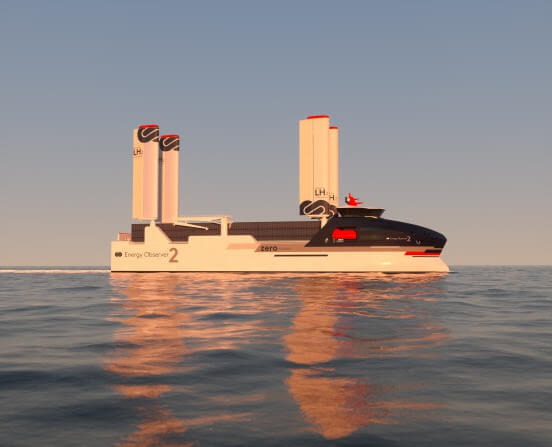 The main features of Energy Observer 2 are 394 feet in length with a 72-foot beam and a draft of approximately 18 feet. They envision the vessel at 5,000 dwt with the capacity for 240 TEU with 480 linear meters for trucks, vehicles, and containers.

The vessel would be outfitted with four rigid wings each with a surface of 1450 m² as we 2.5 MW fuel cells.  It would have a tank with a capacity for 70 tons (1,000 m3) of liquid hydrogen and a range of 4,000 nautical miles operating at a commercial speed of 12 knots.

More details on the concept will be presented later this week at the One Ocean Summit in Brest, France. Victorien Erussard will present the ship on February 10 at the conference. 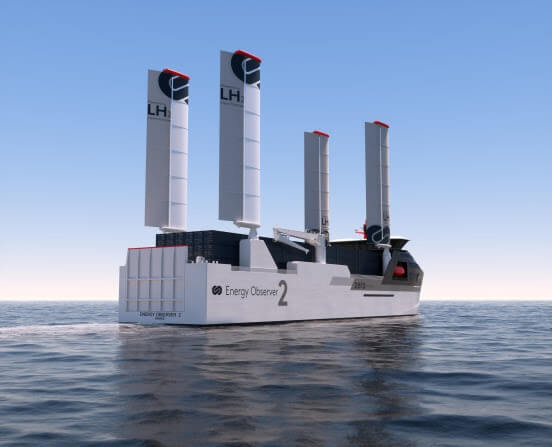