Protestors with the environmental advocacy groups Stand.earth and Pacific Environment staged events yesterday near the Port of Los Angeles and in Seattle to renew attention for their Ship it Zero initiative calling on the largest retailers to transition all their shipments to zero-emission cargo ships. Targeting Amazon, as the world’s largest retailer, the groups’ demands to move all shipping to zero-emissions highlights the broader concern for the shipping community that activists are using retailers and consumers to pressure the industry.

“In the face of record profits, major retailers and their shipping companies have no excuse to not invest in cleaner ways of doing business,” said Gary Cook, Global Climate Campaigns Director at Stand.earth during the protest in Seattle.

The activists carried a mock shipping container through downtown Seattle and delivered it to Amazon’s headquarters with a petition signed by nearly 20,00 people demanding that the online retailer take action to stop the emissions tied to the shipments of its goods. Simultaneously, at a press conference with a backdrop of the San Pedro port complex, the activists called for immediate commitments by Amazon saying as “a main driver behind the changes in shopping patterns that clogging up U.S. ports,” the company must transition their products off of fossil-fueled ships.

Community groups at the Los Angeles event also called on the executive directors of the San Pedro ports, Gene Seroka and Mario Cordero, to end ship pollution. “As the home of the busiest seaport in the Western Hemisphere, it is imperative that Los Angeles lead the way in transitioning to 100 percent zero-emission shipping, much as we’re doing with transitioning to 100 percent zero-emission vehicles,” said Nithya Raman, Los Angeles City Councilmember. 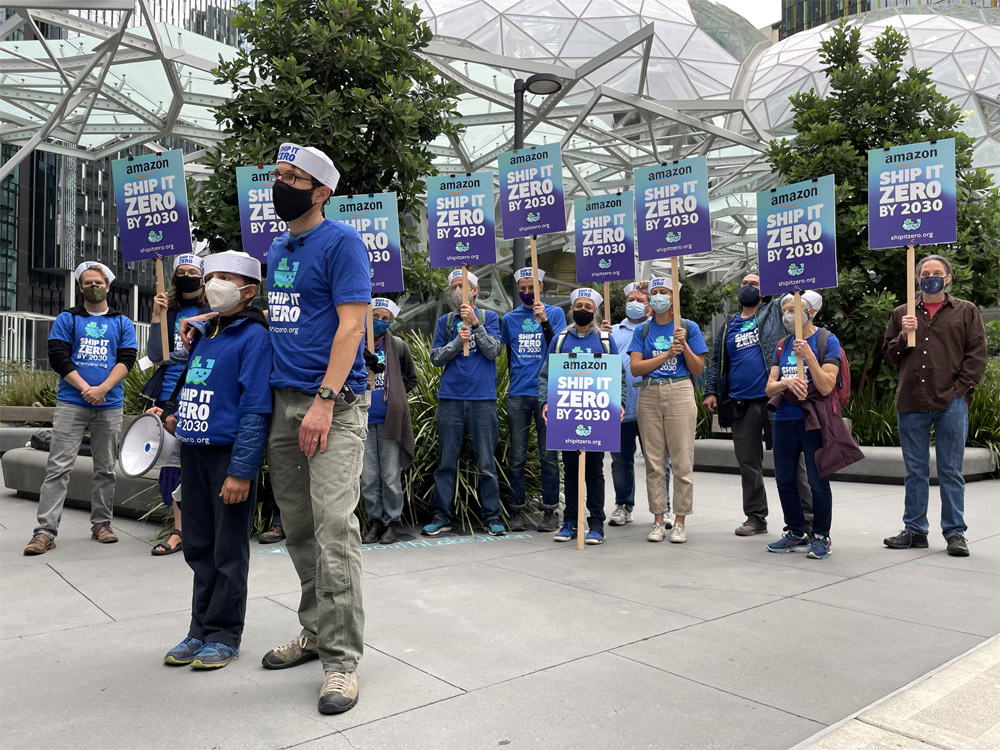 In July, the two activist groups released a report saying that the 15 largest companies are responsible for emitting millions of tons of pollution from importing their goods into the United States on fossil-fueled cargo ships. Collectively, they charge that the top importers of U.S. goods are responsible for emitting as much sulfur oxide, nitrous oxide, and particulate matter as tens of millions of U.S. vehicles every year.

Calling their efforts the Ship It Zero coalition, the groups focused on the retail industry, including Walmart, Ashley, Target, Home Depot, Ikea, and Amazon, as the top maritime polluters. In addition to the large retailers, they have also highlighted food companies including Dole and Chiquita, electronic manufactures Samsung and LG, as well as Nike as being top import polluters. The report accuses the major companies of “hiding from the public the true amount of pollution they produce,” from the shipping industry.

“There are solutions within reach, like green hydrogen,” said Natalie Hernandez, Associate Director, Climate Planning & Resilience at Climate Resolve during yesterday’s Los Angeles event. “We need companies like Amazon to invest in solutions that consider the public health impacts of their ships,” to residents in the communities surrounding the ports.

The environmental groups join a growing cross-section of businesses and groups seeking to apply pressure on the shipping industry and hold them accountable for their environmental impact. Financial institutions using efforts such as The Poseidon Principles and now charters are demanding accountability from the shippers and accurate reporting on their efforts.

Citing the broad forces at work shaping the future of the shipping industry, Knut Ørbeck-Nilssen, CEO of DNV Maritime, said “Business as usual is no longer an option for shipping.” As groups such as the Ship it Zero coalition gain momentum and enlist consumers, the competitive pressures will grow on the shipping industry to demonstrate its response to the demands for change.