Japan’s classification society, ClassNK, has granted its first Digital Smart Ship (DSS) notation. The Sakura Leader, an LNG-fueled PCTC (pure car and truck carrier) built by the Shin Kurushima Dockyard Co. for NYK Line was the first vessel marked with the DSS on its notation in ClassNK’s registry.

Delivered on October 28 to NYK, the vessel is the first LNG-fueled PCTC built in Japan. NYK has also said that it will be the first in its next-generation eco-friendly ships. The line plans to replace its older PCTC fleet with these newer ships.

“ClassNK has granted its Digital Smart Ship on the notation of the groundbreaking LNG-fueled PCTC Sakura Leader,” said Hayato Suga, Corporate Officer, Director of Plan Approval and Technical Solution Division not that it was issued just two months after CLASSNK released the guidelines for the designation. “Granting this notation will be the milestone for our initiative facilitating advanced technology and a model of our upcoming certification process.”

The designation was awarded as a part of the society's new initiative, Innovation Endorsement, designed to certify innovations utilizing digital technology. ClassNK carried out the verification for the vessel reviewing the installation of cutting-edge digital technology in line with its guidelines. As a result of its examination of the vessel’s document and plans and the on-site survey, ClassNK has added three notations to the vessel’s registry: DSS (EE) for the energy efficiency analysis function, DSS (MM) for the machinery monitoring, and DSS (CNS) for the onboard data processing and data transmission to shore. 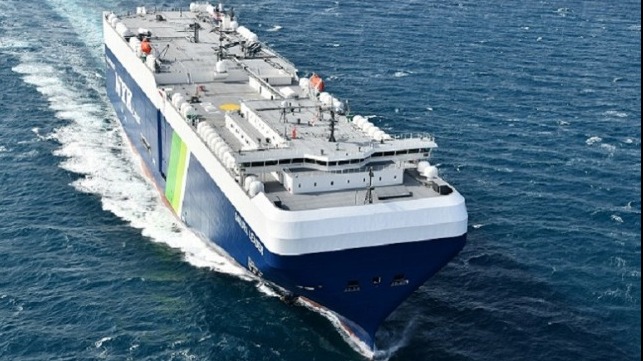 The first large LNG fueled ship to be built at a domestic shipyard in Japan, the Sakura Leader with a length of 653 feet also became the first vessel to receive a ship-to-ship LNG fueling in Japan. By using LNG fuel and improving the hull form, NYK says that the vessel’s CO2 emissions will be improved by about 40 percent compared to conventional heavy oil-fired engines.

The vessel was also recognized by the Ministry of the Environment and the Ministry of Land, Infrastructure, Transport and Tourism as a model project for reducing CO2 emissions from vessels by utilizing alternative fuels.

The vessel with a capacity of up to 7,000 units will be deployed transporting vehicles, including those of the Toyota Motor Corporation. In January 2020, NYK announced that it had ordered a second LNG-fueled car carrier from the same shipyard due to be completed in 2022.

In 2015, the tugboat Kai was Japan's first LNG-fueled ship, and in addition to the car carriers, NYK is also planning an LNG-fueled bulk carrier for coal due in 2023.