Carnival Corporation is adding two cruise ships to its current disposition efforts underway to generate cost savings and reposition the fleet according to a brief filing made with the U.S. Securities and Exchange Commission. This brings to 15 the number of cruise ships Carnival expects to remove from its fleet, which numbered 105 ships as of February 2020.

Today’s filing did not provide details on the timing or plans for the two additional ships, only saying, “senior management of the company evaluated these two ships for impairment and concluded their carrying values are no longer recoverable when compared to their estimated remaining future cash flows.” The corporation reported that it expects to record $600 to $650 million in non-cash impairment charges during the third quarter of 2020 related to all the ships being removed from the fleet as well as “notes receivables with recoverability impacted by the current environment.” While the later statement was not explained, it likely pertains to notes the corporation holds on ships it had previously sold and delivered to buyers.

Carnival on July 10 announced plans to remove nine ships from the fleet in the next 90 days, in addition to four ships that it had previously sold but continued to operate until a future delivery date. The identities of those nine ships emerged as two Costa Cruises ship were sold, Holland American announced four ships to be sold, P&O Cruises delivered one to a buyer, and Carnival Cruise Line sold two ships for recycling. Carnival Cruise Line also announced that it would put two additional sister ships into a long-term layup. 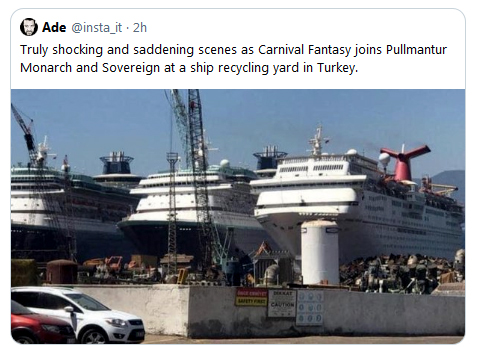 Images of the first of the Carnival Cruise Line’s ships to be sold for scrap, the Carnival Fantasy, emerged today on social media as the ship was run ashore in Turkey. Introduced in 1990, the ship was the first ship in what became the first large class of cruise sister ships built in the industry. At 70,000 gross tons, the Carnival Fantasy was also the first large modern cruise ship introduced in the short cruise market and spent much of her career operating short cruises. Now she has become the first cruise ship Carnival Cruise Line delivered to a scrapyard in its nearly 50 year history.

Run ashore alongside the two former Pullmantur cruise ships, the Sovereign and the Monarch, it made a unique image as the three contemporary cruise ships that had helped to build cruising in the early 1990s are to be scrapped side by side in Turkey. The Carnival Inspiration, a sister ship to the Carnival Fantasy, is also due to arrive in Turkey for scrapping by early next week.

Today’s announcement of the two additional ship sales immediately set off speculation in cruise circles to the identity of the further ships to be sold. The corporation’s filing also concluded by saying, “We plan to continue to evaluate other options to maximize our liquidity and best position our fleet for future operations.”