Swedish authorities approved a salvage plan for the Almirante Storni that calls for the vessel with its cargo fire still burning to be moved into the port of Gothenburg. They believe that the tricky operation is their only chance to extinguish the fire and that it must be done before bad weather reaches the area later this weekend.

The Swedish Transport Agency reported that it received an official request from the owners of the bulker to move the vessel to a protected port and after reviewing the plan with all the involved agencies has granted permission for it to proceed. Local newspapers are reporting that salvage experts from the Netherlands flew to the site and are prepared to assist in the complicated effort of moving the vessel to a berth. Once there, they plan to begin to unload the timber to reach the heart of the fire. Weather conditions have been favorable, which is also contributing to the decision to move the ship to port.

Barring any last-minute developments, they plan to start work at around 6:00 a.m. Saturday morning and they expect it will take two to three hours to complete the salvage operation. The Swedish Coast Guard and the commercial vessels will escort the ship to port and it will berth in Gothenburg, where crews will work on the fire.

“Good salvage planning has been done,” said Per Nyqvist, head of rescue at the Greater Gothenburg Rescue Service. “The challenge now is to have enough resources for the possible relapses that may occur. We do not really know what will happen when we start lifting the load.”

The Coast Guard reports that 600 tons of fuel remain aboard the vessel. Preparations were made to pump it to another ship, but so far it has not been necessary. The Coast Guard has however requested assistance from a broad range of agencies, including the Sea Rescue Society and the Swedish Armed Forces. 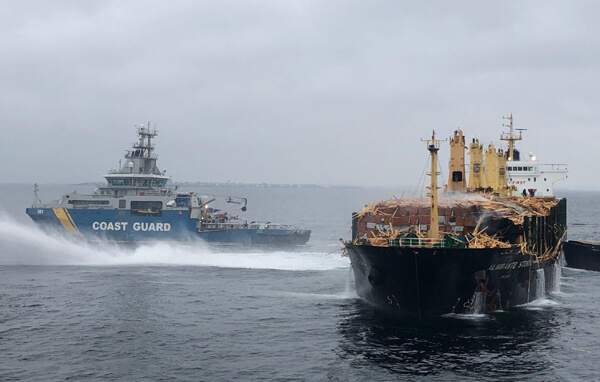 “Now the event enters a new phase of moving the ship towards port,” said Nyqvist during the briefing. “There we can better attack the fire together with the rescuers who are contracted by the shipowner and the resources that are already working with on the incident.”

The firefight has lasted for a week with the Coast Guard saying they were only successful in containing the fire but not extinguishing it due to the tightly packed nature of the timber cargo. The Coast Guard said it has had 150 people on duty at all times since the beginning of the effort along with personnel changes and resupplying efforts.

During the briefing, Swedish Coast Guard officials said this was the largest rescue effort they had ever undertaken. The authority is now preparing to demand compensation from the vessel’s owners for its work, saying that it believes it has prevented an environmental disaster.