Britain’s much anticipated new polar research vessel, RRS Sir David Attenborough returned to the shipyard at the end of March causing further adjustments to the trials and outfitting schedule for the already delayed vessel. The British Antarctic Survey (BAS), which along with the Natural Environment Research Council (NERC), will be operating the vessel is blaming the latest delays on technical issues identified during the trials along with the impact of COVID-19 related restrictions. The vessel is expected to remain at the shipyard until July.

“The state-of-the-art vessel has been undergoing sea trials since early February to test maneuvering, anchoring, and engineering systems,” said Athena Dinar, Deputy Head of Communications for BAS. She explained that one of the purposes of the latest round of trials for the ship was “to enable the crew to undertake extensive training in preparation for the maiden voyage to Antarctica later this year.”

Having cost nearly $275 million and taken more than four years to construct, the vessel was handed over by Cammell Laird Shipbuilders to NERC at the beginning of December 2020 after having undergone builders’ trials in November. The start of those sea trials was delayed by bad weather, winds, and rain causing headlines in the British tabloids saying the vessel “did not go to sea because of a breeze.” BAS responded by saying “her sophisticated power management and stabilization systems require several days in calm seas to balance and optimize performance.”

After the handover, plans called for 50 days of training at Holyhead Port, so that the crew could begin to familiarize themselves with the ship and its equipment. At the beginning of February, she went to sea on further operational and scientific trials with plans to test functions such as anchoring, maneuvering, dynamic positioning, and helideck landing. The next stage called for ice trials and the installation of additional scientific equipment in Norway before a maiden voyage to the Antarctic in November 2021. 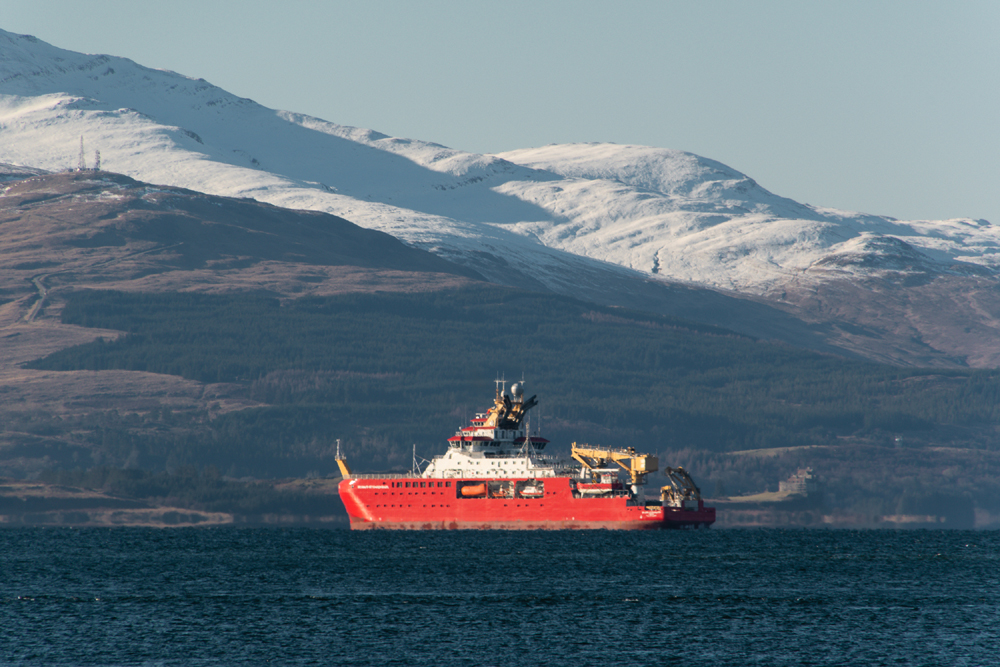 At anchor off Oban during the trials (Will Harvey photo)

During the most recent sea trials, "a lifeboat failed to deploy correctly during testing," according to BAS, and two people were injured during the incident. The UK Marine Accident Investigation Branch (MAIB) subsequently reported that it has launched an inquiry into the circumstances of the incident. MAIB’s summary of the accident says the injuries occurred when the lifeboat rolled onto its side and fell overboard during a launching drill at Loch Buie, Scotland.

“The decision was taken to adjust the trials program so that the lifeboat and other technical issues identified during trials can be fixed,” said Dinar. “It is a complex build, with thousands of components to test. During a lifeboat drill, the deployment mechanism malfunctioned.”

The return to the shipyard and the impact of restrictions from COVID-19 is also causing further adjustments to the outfitting. Scientific equipment that was due to be installed in Norway will now be carried out at Cammell Laird, while in March BAS also said that the pandemic had caused significant delays to the completion, certification, mariner training, and sea trials program. The planned ice trials in the Arctic were canceled because travel restrictions affecting Norway made it impossible to get specialists on board.

BAS says that there are no delays in the overall trials program, but they warned researchers in March that priority is being given to ensuring that the vessel “achieves a seaworthy, certified ship that can sail safely to Antarctica later this year to resupply stations and deliver essential equipment and supplies.” UKRI-NERC Marine Planning is reportedly liaising with funded grant owners as to when and what ship their cruises may occur on while reporting that it is expected that the RRS Sir David Attenborough will commence existing funded grant science from 2023.