There was a peak in production between 2007 and 2012, when annually more than two hundred ships were delivered. Such levels had not been seen since 1985. Since 2015, production has fallen back again to below a hundred units per year and in 2018 only 66 units hit the waters.

Overall, the current multipurpose fleet consists of 4,700 ships with total deadweight for 63 million tons. The fleet can broadly be split into two categories: those with ramps (Ro/Ro) and those without. The order book, at 236 units or just five percent of the operating fleet, is considered modest. It includes all vessels delivered, or due for delivery in 2019.

The operating model of many breakbulk shipping companies remains that of traditional tramping, carried out on a global scale. The fleet comprises largely modern, sophisticated and highly versatile vessels that are fit for purpose, able to perform a variety of functions all the while being operated by established, highly experienced and professional carriers.

BBC Chartering of Leer/Germany is the undisputed number one by aggregate heavy-lift capability of its fleet, followed by Zeamarine of Hamburg, Amsterdam-based Spliethoff, Cosco Shipping Specialised Carriers of Guangzhou/South China and China/Polish Chipolbrok. 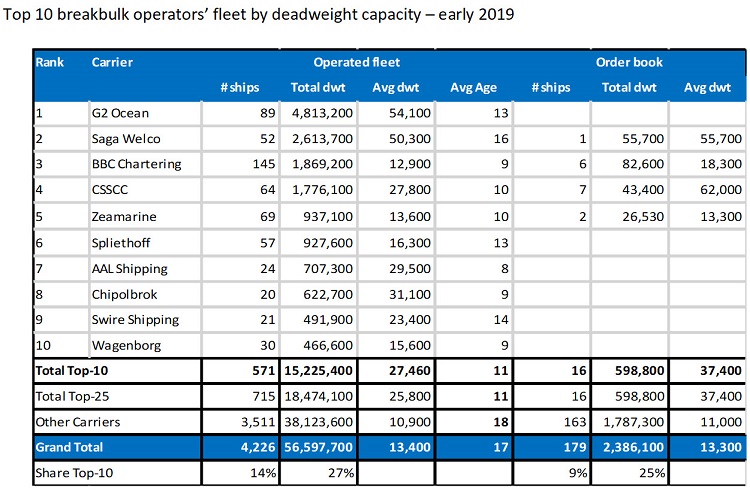 However, by average heavy-lift capability (irrespective of deadweight), it is HMM with just four vessels, heading this ranking with an average of 640 tons. Here, Chipolbrok comes second with 570 tons and Singapore’s AAL third with 470 tons. Numbers four and five are Zeamarine (395 tons) and BBC Chartering (380 tons).

Some 50 years ago, Ro/Ro was embraced as a suitable alternative for intra-Europe shortsea trades. Investment in Ro/Ro newbuildings peaked in the late 1970s when it was found to be the ideal ship for the deepsea Europe-Middle East and West Africa markets, amongst others, which were then going through an infrastructure development boom. Port facilities there were then very limited, with congestion running into weeks, if not much longer, for general cargo ships.

However, the conventional deepsea Ro/Ro solution is facing a developing world, one that is covered with harbor cranes of all types and sizes, says Dynamar. Hence, the ramp generally no longer compensates for the lack of shore cranes. Instead, it has become a valuable add-on, a specialty to allow what is basically a multipurpose ship to carry cargoes that would not be suitable for handling by onboard or quay cranes.

This will ultimately impact vessel design, and Dynamar expects that the non-geared Pure Car and Truck Carrier (PCTC) will eventually take over from the “classic” conventional Ro/Ro ship. WWO’s Mark IV & V Ro/Ro vessels, each with the look of a PCTC, are an example of this development.

Boskalis (previously named Dockwise) is rated the second largest heavy-load operator for the first time. The fall in the ranking of this industry leader is set to continue as the company seeks to dispose of its closed-stern vessels on the back of disappointing results, says Dynamar. It may be assumed that its Boka Vanguard, with 116,000 tons deadweight, 15.5 meters submerged depth and 16,000 sqm deck space will remain at least the biggest semi-submersible ship for years to come.