Construction orders for new containerships are at a high, setting new records in March and highlighting the confidence of the shipping industry. The industry trade group BIMCO is highlighting the order book as its “number of the week.”

BIMCO reports that in March, orders for 45 Ultra-large containerships (15,000 and above TEU capacity) were placed, breaking a record. In addition, they report that an additional 27 orders for smaller sized ships were placed in the same month, bringing the total to 866,060 TEU on order worldwide. BIMCO’s Chief Shipping Analyst Peter Sand believes this indicates a turnaround for the container shipping sector.

The turnaround for the container shipping sector offers a glimpse of the level of confidence currently seen in the business on behalf of owners as well as investors says BIMCO. For all of 2020, a total of 995,000 TEU of container shipping capacity was ordered. Capacity ordered in the first quarter of 2021 has already reached 1,398,000 TEU, a six-year-high compared to previous full years.

“The industry is keen on benefitting from the economies of scale that ultra-large containerships have to offer if you carry payloads close to its cargo carrying capacity,” says Sand. 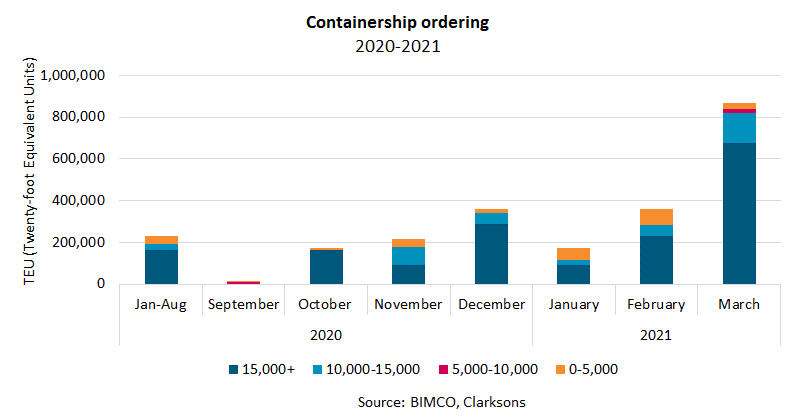 “The mammoth size of some containerships was questioned many times during the recent six days of the Suez Canal blockage, as some saw it as an omen of ships becoming too large, compromising supply chain reliability, navigational excellence, and safety,” Sand says. “But as I said at the time, you should not expect much change on that account, as Ultra-Large containerships are the preferred choice of ‘weapon’ in the arms race of the container shipping industry seeking to improve long-term profitability.”

He, however, is also highlighting an interesting anomaly in the market bucking the trend where people believe that the lines would be solely investing in the largest vessels. Sand points out in October and December 2020, orders placed were almost exclusively for ships with a maximum capacity of 23,000 to 24,000 TEU, with only four out of 23 orders for ULCS below that range. Included in this were the competing orders from ONE and Hapag who each reported they had ordered the world’s largest containerships. ONE said it would order six vessels with a capacity greater than 24,000 TEU just days after Hapag said it would order six vessels with a capacity of 23,500 TEU.

Sand highlights that while there has been a significant number of construction orders in 2021 for containerships, the lines are mostly been investing in which is emerging as the mid-sized boxship. According to BIMCO, so far in 2021, only four out of 81 orders for ships with a capacity of at least 11,800 TEU were for ships larger than 15,500 TEU. Seaspan, for example, which has ordered a total of 37 containerships, has 35 of them in the range between 12,000 and 15,500 TEU and only two Ultra-Large 24,000 TEU vessels.