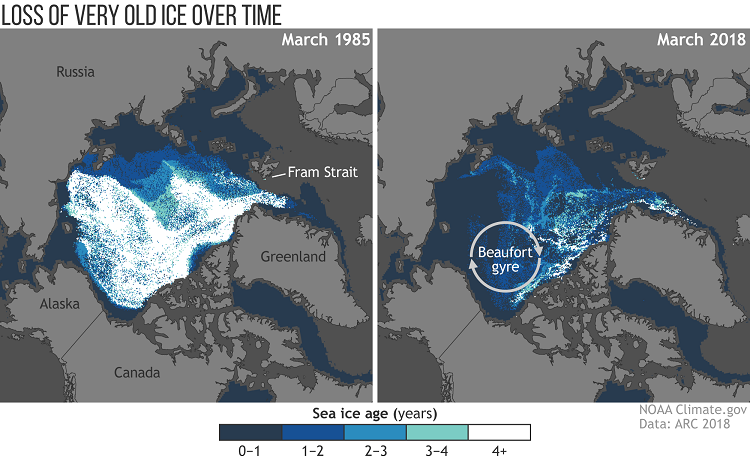 Declining Arctic sea ice: The 2018 Arctic Report Card found the Arctic region had the second-lowest overall sea-ice coverage on record. The map shows the age of sea ice in the Arctic ice pack in March 1985 (left) and March 2018 (right). Ice that is less than a year old is darkest blue. Ice that has survived at least 4 full years is white. Maps were provided by NOAA Climate.gov and based on data provided by Mark Tschudi./University of Colorado/CCAR. (NOAA Climate.gov)

Surface air temperatures in the Arctic continued to warm at twice the rate relative to the rest of the globe. Arctic air temperatures for the past five years (2014-18) have exceeded all previous records since 1900.

In 2018 Arctic sea ice remained younger, thinner, and covered less area than in the past. The 12 lowest extents in the satellite record have occurred in the last 12 years. Pan-Arctic observations suggest a long-term decline in coastal landfast sea ice since measurements began in the 1970s.

Now in its 13th year, the 2018 Arctic Report Card is a peer-reviewed report that provides an annual status update on the region and compares these observations to the long-term record. It was compiled from the research of 81 scientists working for governments and academia in 12 nations.