The small Caribbean island of Barbados has become a vital port for the cruise industry during the coronavirus crisis. Typically a port of call for passengers to enjoy the beaches and natural scenery, the island at the southeast end of the Caribbean has played an important role in the efforts to return crew members home.

Early in the coronavirus crisis, Barbados pledged its support to the cruise industry, and the operator of dock facilities Barbados Port made vital dock space available. As a result, there has been a steady stream of cruise ships arriving. Initially, during the cruise suspension, many of the cruise lines used Barbados because it also has a large airport that permitted the airlift of European passengers and later crew members to Europe and Asia. European cruise ships from AIDA, P&O Cruises, and TUI were all in Barbados as well as North America brands including Seabourn Cruise Line.

In June, as the cruise industry increased its efforts to send crew home from its ships, Barbados remained a key part of these operations. As a result, the port has provided a dock for a broad range of cruise ships.

Recently, Royal Caribbean Group availed itself of the facilities at Barbados. This included docking at different times the two largest cruise ships in the world. In May, the Harmony of the Seas made two calls in Barbados along with the Liberty of the Seas. In a series of charter flights, Filipino crew members disembarked the ships and returned to Manila. Other ships debark crew members including ones headed to Guyana in South America. 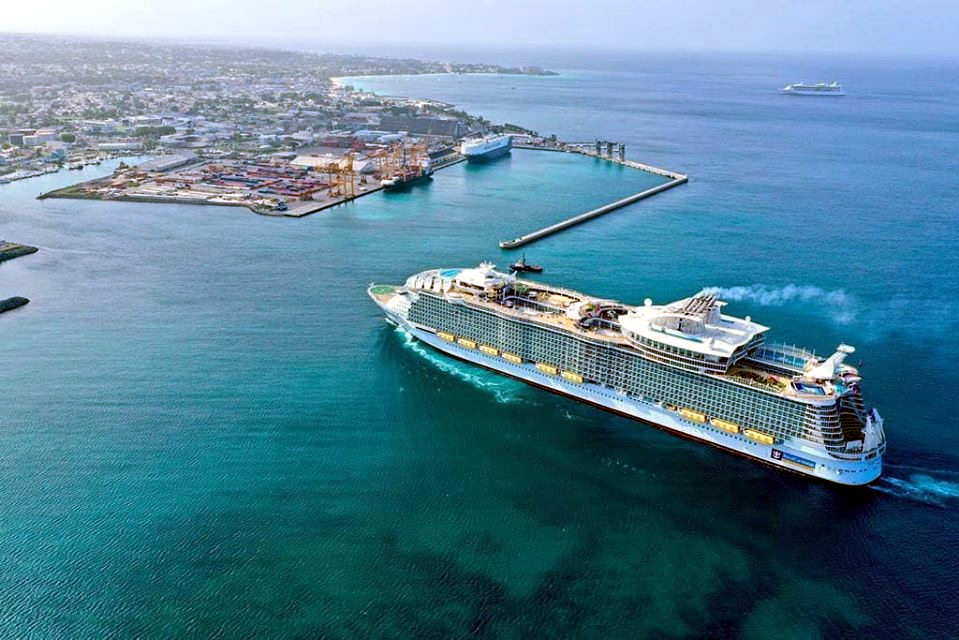 The world's largest cruise ship, the Symphony of the Seas, arrived in Barbados on July 8, 2020 - Barbados Ports

On July 8, the world’s largest cruise ship, Royal Caribbean 228,000 gross ton Symphony of the Seas arrived in Barbados. According to local reports, more than 300 crew members were transferred off the ship to other Royal Caribbean ships. Currently, 10 ships from the Royal Caribbean Group are in the waters off Barbados.

Other cruise lines have also been able to use the facilities at Barbados to assist with their crew repatriation efforts. Two of Disney Cruise Line’s ships, the Disney Dream and the Disney Wonder, are reported to have disembarked more than 600 crew members in Barbados.

The local newspaper, The Loop, reported that in May alone more than 15 repatriations flights left Barbados going to North and South America and Europe.