The Australian company GRD-Franmarine conducted the first commercial demonstration of its hull cleaning technology at the Australian Marine Complex in Western Australia this week.

The Envirocart technology is the first system to receive government approval to conduct in-water hull cleaning in Fremantle and Pilbara Ports since the practice was banned in Australia and New Zealand in 1997. 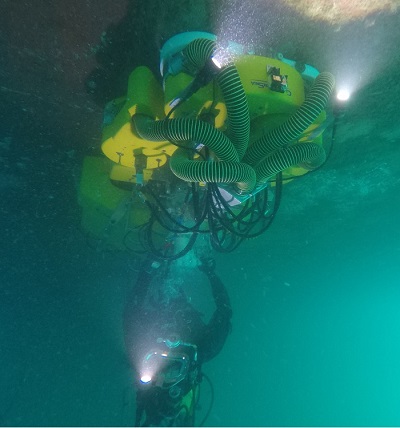 Envirocart is a fully enclosed capture and containment hull cleaning technology that cleans the hulls of large vessels in the water. The system features a multi-stage filtration system that captures particles down to 15 microns in size, ensuring all bio-organic particles removed by the non-abrasive cleaning system are captured and contained in a way that meets the most stringent bio-security guidelines in the world.

Diver-steered, it features a surrounding skirt and three sets of blades that rotate 20mm above the surface of the hull. The high-speed rotation creates a powerful vortex that sucks the biofouling from the hull. Drive wheels propel the Envirocart forward as it cleans. A forward-facing 45 degree angle ensures all debris is lifted clear of the hull without dragging and scratching the anti-fouling paint, enabling even soft anti-fouling coatings such as silicon to be cleaned without damage. This has been proven in Intersleek underwater cleaning panel tests conducted by International Paint, says GRD-Franmarine, and makes Envirocart different from other systems which rely on abrasion to remove fouling.

For irregular surfaces, shrouded hand tools and a containment box have been developed. Each cleaning tool has a suction shroud that connects separately to the central, fully enclosed suction system.

When the biofouling is extracted it flows into a large surface filtration system that can process up to 2,000 liters per minute. The biofouling is captured though a series of filters and contained. The filtered water is treated with UV before being discharged back into the ocean. The company is also exploring the potential for using the material in agriculture.

Australia’s economy is heavily dependent on seaborne exports (iron ore, coal, LNG) and some of Western Australia’s ports are among the busiest and highest tonnage ports in the world. For the past 20 years, large commercial and naval vessels operating in Australian waters have had to be dry-docked for hull cleaning, an expensive, time-consuming and inefficient system which significantly add to the costs of maritime shipping operations, or been cleaned in other jurisdictions where there are no regulations to protect the marine environment.

To manually clean some of the large bulk carriers that enter Port Hedland would take a month, and Envirocart offers a huge time saving by being able to clean a ship while it is being loaded in port, says GRD-Franmarine CEO Rory Anderson. “We believe it has the potential to revolutionize hull cleaning technology which will deliver massive cost savings and improved productivity to commercial and military fleet operations.”

Anderson expects the system to be rolled out to other ports in Australia and New Zealand over the coming months and is currently in discussion with ports in the U.K. As well as commercial and naval vessels, he says the system is suited to the offshore oil and gas industry for cleaning jacket legs and FPSO hulls.

In March this year, the bulk carrier DL Marigold became the world's first biofouling “casualty.” The vessel was ordered from both New Zealand and Fijian waters for being an invasive species threat, after divers discovered dense fouling of barnacles and tube worms on the ship's hull. It was the first time an international ship had been ordered to leave a New Zealand port because of biofouling.

Like ballast water, biofouling is considered one of the main vectors for bioinvasions. At a presentation at the World Ocean Council's Sustainable Ocean Summit late last year, IMO technical officer Dr Theofanis Karayannis suggested that hull biofouling could be just as serious a problem for the spread of invasive aquatic species as ballast water.

The IMO is also moving its attention to hull biofouling with a new global project, the GloFouling Partnership. The Partnership is a collaboration between the Global Environment Facility (GEF), the United Nations Development Programme (UNDP) and the IMO, and it has been given the go-ahead and allocated $6.9 million.

GRD-Franmarine has been invited give a presentation about the system to the IMO Annual Conference later this year.

Globally the hull-cleaning industry is estimated to be worth $10.2 billion.