In the latest tense exchange between the Libyans and the NGO humanitarian organizations operating in the Mediterranean, a patrol boat is heard threatening one of the rescue vessels. The German NGO Sea-Watch Tweeted out audio recordings of the exchanges between its crew and the patrol boat in which they are being ordered to alter course away from Libya while in a second exchange the patrol boat can be heard to threaten that it would begin shooting if its orders were not obeyed.

The NGO has a contentious relationship with the Libyan patrol boats frequently accusing them of inhumane treatment of the migrants and refugees attempting to cross the Mediterranean on anything from rafts to often unseaworthy decrepit old launches and over packed boats. In July 2021, Sea-Watch released images from its reconnaissance airplane of a Libyan patrol boat chasing and shooting at a refugee craft. Sea-watch released a statement saying, “the crew of our reconnaissance aircraft Seabird witnessed a brutal attack by the so-called Libyan Coast Guard on 50 people in distress at sea.” 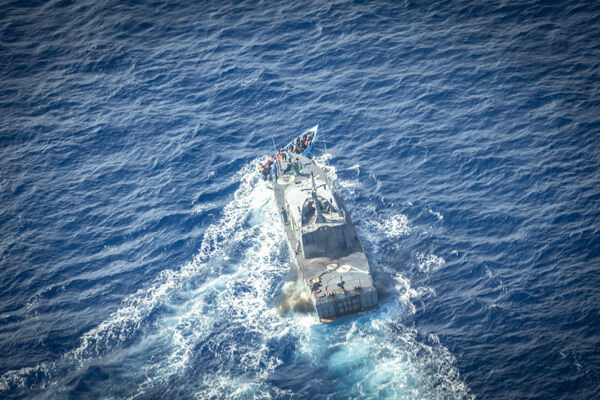 Early in 2020, the NGO acquired a 1,100 gross ton former German offshore research vessel and renamed it Sea-Watch 4 as its largest vessel for the humanitarian missions. On its most recent mission, Sea-Watch 4 arrived in the defined search and rescue zone in the Mediterranean on November 16 and began its watches looking for the small crafts. On November 18, they came across an overloaded rubber boat rescuing 90 people from the craft and six more from the ocean followed later that day by an additional 24 people including several children from the two crafts.

A Libyan patrol boat unlawfully pressured the Sea-Watch 4 to leave the region, even though the ship is in international waters. pic.twitter.com/gGUGG196YE

"Stop your engine. This is Libyan Navy, we will shoot you."

Yesterday, the so-called Libyan Coast Guard repeatedly threatened to shoot at the #SeaWatch4.

In addition, the patrol boat illegally ordered us to leave the area of operation. pic.twitter.com/nDPQp2adr5

“The situation for the Sea-Watch4 has calmed down,” the NGO later Tweeted. “Yet for years the EU has relied on this cooperation with the so-called Libyan Coast Guard that violently prevents people from fleeing and is not too shy to threaten rescue ships.”

On November 20, Sea-Watch 4 took aboard an additional 73 refugees from a small boat and the following day came across another boat with 102 people, including several pregnant women. The efforts have been proceeding without further intervention from the Libyan patrol boats and as of today, Sea-Watch 4 is reporting it has carried out seven rescues for a total of 482 people, including a one-day-old baby born in one of the over packed boats.

The Italian Coast Guard came alongside this afternoon, taking the woman and her newborn baby as well as five other people in need of immediate medical attention. Sea-Watch 4 remains at sea with 475 people awaiting the authorities to assign a port of safety to offload the refugees.