China remained the trading nation best connected to others by sea in 2018, according to UNCTAD’s latest Liner Shipping Connectivity Index (LSCI), released alongside the Review of Maritime Transport 2018.

The LSCI is an indicator of a country’s position within the global liner shipping networks. It is calculated from data on the world’s container ship deployment: the number of ships, their container carrying capacity, the number of services and companies and the size of the largest ship.

China's LSCI number has increased by 88 percent since UNCTAD first compiled the index in 2004.  The best-connected territories for seaborne trade were all in Asia, with Singapore (2), Republic of Korea (3), Hong Kong (4) and Malaysia (5), each with a score of more than 100 according to the index’s metrics.

At the other end of the table, the worst-connected territories, meaning trade in shipped goods remained problematic with knock-on economic effects, were Norfolk Island, Christmas Island, Cayman Islands, Bermuda and Tuvalu. 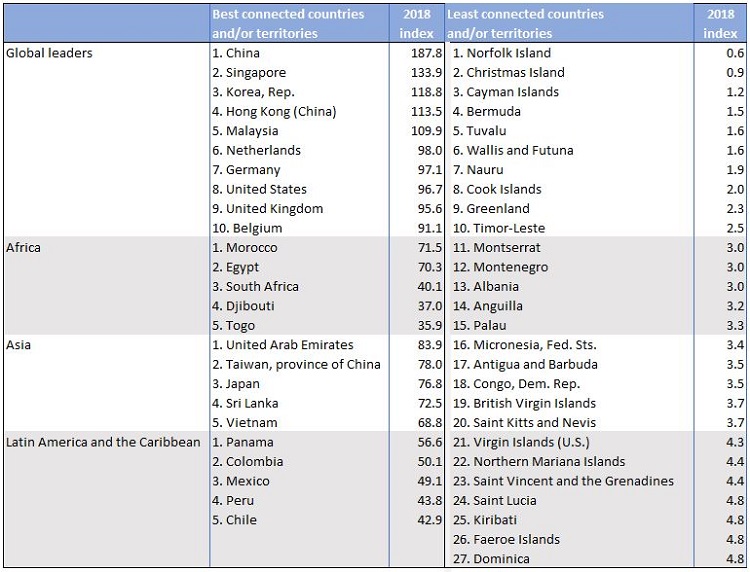 The top five territories that increased their score in the index in 2018 compared to the year before did so by the following percentage growth rates.
• United Arab Emirates (179 percent)
• Maldives (125 percent)
• Mauritania (77 percent)
• Eritrea (73 percent)
• the Federated States of Micronesia (69 percent)

Since the index was first published by UNCTAD, Morocco has had the highest LSCI growth among African countries, with its number increasing by 661 percent between 2004 and 2018. In South-East Asia, Vietnam’s LSCI number increased by 435 percent during the last 15 years, the highest growth in this region. In Latin America, the highest surge was recorded by Peru, at plus 196 percent. The strongest decline in their LSCI numbers in the last 15 years was recorded by Venezuela and Yemen.

Around 80 percent of global trade by volume and over 70 percent of global trade by value are carried by sea and are handled by ports worldwide. Global maritime trade in 2017 was supported by an upswing in the world economy, expanding at four percent, the fastest growth in five years. However, UNCTAD warns that downside risks such as increased inward-looking policies and the rise of trade protectionism are weighing on the outlook. An immediate concern is the trade tensions between China and the U.S., the world’s two largest economies, as well as those between Canada, Mexico, the U.S. and the E.U. “Escalating trade frictions may lead to a trade war that could derail recovery, reshape global maritime trade patterns and dampen the outlook,” states the report.

Other factors driving uncertainty include the ongoing global energy transition, structural shifts in economies such as China, and shifts in global value chain development patterns. If leveraged effectively, game-changing trends, such as digitalization, electronic commerce (e-commerce) and the Belt and Road Initiative, the exact impact of which is yet to be fully understood, are expected to have a positive effect on global seaborne trade.