Amphibs Prove Their Worth in Australian Relief Effort

The Royal Australian Navy amphib HMAS Choules has returned to Mallacoota, Victoria, to provide more support to the fire-ravaged coastal town from which she evacuated more than one thousand people and 140 pets just days ago.

After disembarking the evacuated passengers at Western Port, the crew of the Choules conducted a quick turnaround to return to Mallacoota. The ship arrived at Western Port at 1630 hours on Saturday, and once the guests were safely disembarked, attention turned to the job of preparing the ship and on-loading supplies to deliver to Mallacoota for the recovery efforts.

“No sooner than the last guest was in the hands of the other agencies, everyone turned their attention to cleaning the decks, washing the blankets and bedding and making sure the ship was ready for her next task," Warrant Officer Arthur Mitcherson said.

Once the ship was prepared, the next task was to begin on-loading supplies, equipment and personnel to assist the Mallacoota community, which remains isolated and only accessible by sea or air. Among the supplies brought on board were medications, pediatric drugs, medical oxygen, respirators, snacks, multiple pallets of bottled water and fuel for emergency generators.

The officer in charge of Choules' Army contingent, Major David English, oversaw the on-loading of a range of equipment, including Army and State Emergency Services vehicles, VicForests vehicles and personnel. 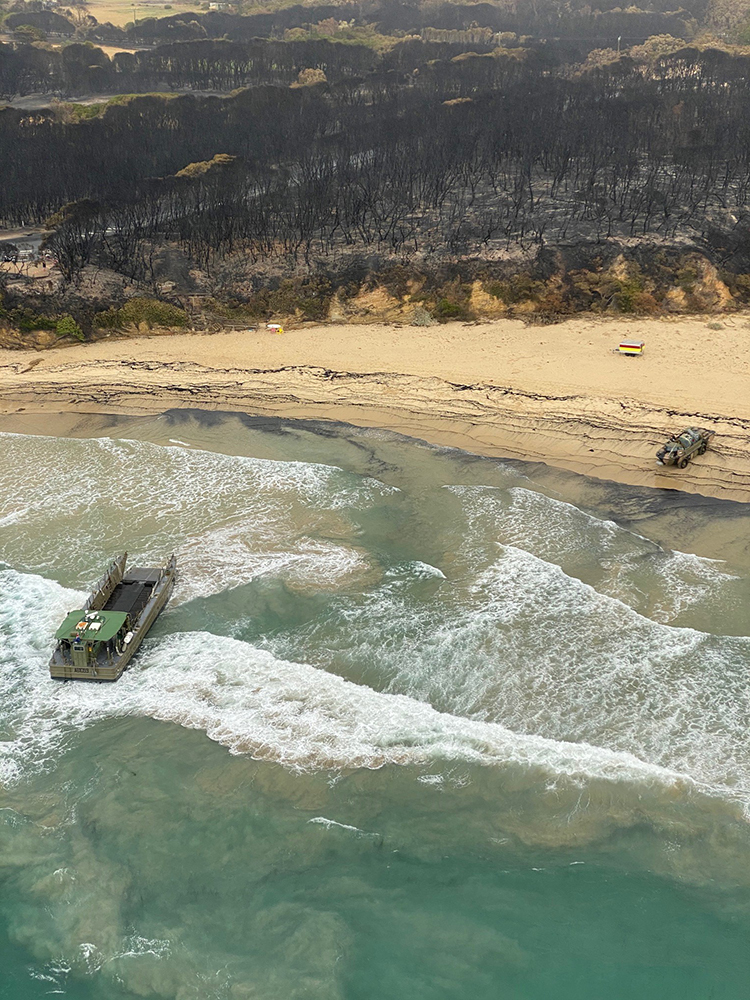 “As we return to Mallacoota, much of our focus will be to provide support to various agencies as they seek to clear roads and re-open access to the township by land,” Major English said. “This will be a big task, and our focus is to provide whatever support we can to the various organisations who are best placed to handle each of these tasks. Being Army members who are part of ship’s company means that we can extend the capability the ship brings in terms of logistics support and ship-to-shore movement of personnel, vehicles and equipment.

Along with MV Sycamore and HMAS Adelaide, Choules is part of the Australian Defence Force’s efforts to support relief for the bushfire emergency. The naval response has been particularly important for communities cut off by fire on the ground and by smoke from the air; In Mallacoota, helicopter and aircraft have at times been forced to turn back due to low visibility. About 300 people are still awaiting for evacuation from Mallacoota, according to incident commander Lt. Gen. Greg Bilton.

Our people are highly trained & professional, but not always able to complete the mission on first try.
This video shows how heavy smoke from bushfires has prevented some C27J & C130J flights from reaching #Mallacoota & #Merimbula #AusAirForce #AustralianFires #YourADF pic.twitter.com/PhNjNIUVHf