The Marine2 launched by KLAW is 32% shorter and 25% lighter than alternative Marine Breakaway Couplings on the market and is designed to reduce stress on hoses used on offshore hose reel applications.

The shorter design as shown in illustration A reduces coil disruption on the hose reel; unlike alternative designs (illustration B) that are longer and therefore increase hose stress and fatigue.

The KLAW Marine Breakaway Coupling provides a safe parting point within the hose transfer system in ship-to-ship, ship-to-shore and vessel to offshore platform transfers. The coupling is designed to activate in an emergency such as vessel drift in stormy conditions or pressure surge. When activated, the valves within the coupling shuts both upstream and downstream flow within the hose transfer system and allows immediate separation of the line.

The KLAW Marine2 therefore minimizes risk of spill and reduces the risk of damage to assets, injury to personnel, extended downtime and contamination of the environment.

Like its KLAW predecessor, the Marine2 is designed to resist those bending moments and torsional forces expected from floating wave motions and the rigors of the marine environment and reacts only to those axial forces that occur in an emergency.

The KLAW Marine2 also continues to use the proven and reliable KLAW Flip-Flap Valve system which delivers 100% instant closure.

KLAW Easy Reset Facility is also fitted as standard on the Marine2 which means the coupling can be serviced or reset after activation within the line – again reducing downtime and stress on the hose due to the reduced need for additional handling.

The design of the KLAW Marine2 Breakaway Coupling is based on 18 years of successful field performance and over 15,000 KLAW units in reliable operation around the world.

The KLAW Marine2 comes in standard nominal bore sizes of 2”, 3”, 4”, 5” and 6” and is compatible with soft walled, hard walled, and composite hoses.  A variety of end connections are available including NPT and BSP threaded, flange connections, and hammer union fittings. 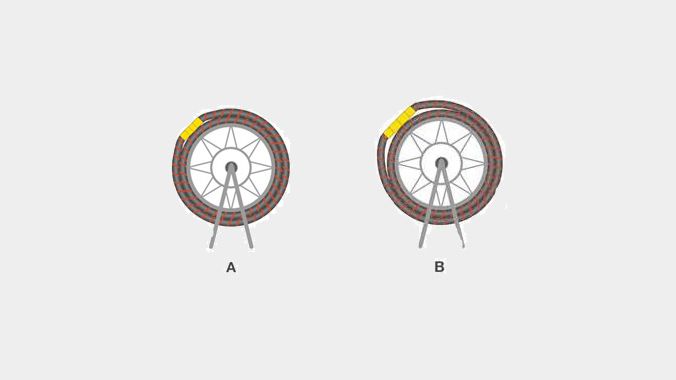 CAPTION FOR ILLUSTRATION A: Illustration A demonstrates the advantage of the short Marine2 KLAW Marine Breakaway Coupling where less space is shown between the coupling and connectors and the inner hoses.

CAPTION FOR ILLUSTRATION B: Illustration B shows the disadvantage of alternatives: the longer coupling results in greater spacing between hoses and inner hoses. With additional hose winding over this coupling section, the additional weight again increases the stress on the hose and therefore an increased risk of fatigue.