More than 100 years after she went to the bottom in the “Great War,” the wreck of USS Jacob Jones, the first U.S destroyer to be sunk by enemy fire during World War I, has been located and filmed. Deployed to help fight the emerging dangers of the submarine, she would also be claimed by the menace of the new form of warfare.

A team of British divers announced this week that they had identified the wreckage. It was discovered in about 400 feet of water (120 meters) about 60 nautical miles south of Newlyn in Cornwall, England. The Tucker-class destroyer was struck by a torpedo fired by German submarine U-53 on December 6, 1917. It sank within a span of eight minutes with only 46 of the 110 crew members surviving the attack.

“We are thrilled to announce that we have identified the wreck of USS Jacob Jones, the first U.S destroyer to be sunk by enemy action,” said Steve Mortimer in a Facebook post. He was one of the six divers on the expedition. 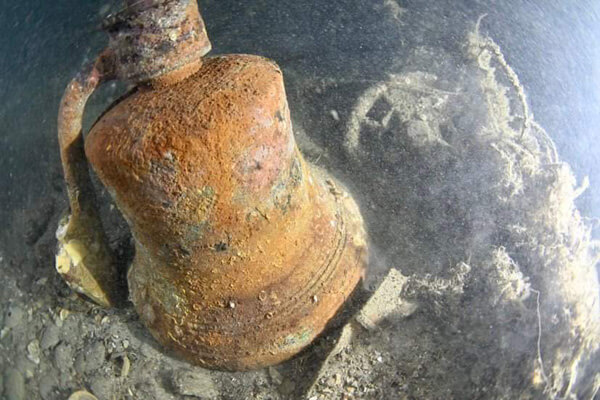 They were able to make a positive identification of the wreckage by locating the warship’s bell. In the water for more than 100 years, they turned it over and cleared some mud, and could clearly read the word Jacob. They also saw other identifiable sections such as the base of a gun mount on the deck of the ship. The team did not remove anything from the wreck site and intends to liaise with U.S. authorities over the next steps.

Jacob Jones was a Tucker-class destroyer commissioned into the U.S Navy in 1916. Built as one of the six vessels, the ship was mainly involved in patrols, convoy escorts, and rescues sailing from the U.S base in Ireland. Of all destroyers in European waters, she was credited with rescuing the greatest number of survivors, a total of 374, from torpedoed ships, before she met her demise from a torpedo,

Among the heroic rescue operations of Jacob Jones in the submarine-infested waters was picking up 44 survivors from the British steamship Valetta that had been the victim of a U-boat on July 8 according to the Naval History and Heritage Command. Later that same month, the destroyer sighted a periscope while escorting the British steamship Dafila, but a torpedo hit the steamship before the destroyer could attack. She was able to rescue 25 survivors from the sinking Dafila. Later, she picked up 305 survivors from torpedoed British cruiser Orama while conducting special escort duty between Ireland and France.

The destroyer’s fate however would also be sealed by a torpedo fired from a U-53 German submarine. On the fateful day, Jacob Jones departed Brest, France, to return to Queenstown, Ireland. At 16:21 she sighted a torpedo wake at a thousand yards while steaming independently 25 miles southeast of Bishop Rock, Scilly Islands, and 20 miles east of Start Point, England.

She maneuvered to escape, but the torpedo struck her starboard side causing extensive damage. With the stern sinking rapidly it was not possible to make safe the depth charges which were triggered, hastening the loss of the vessel which sank below the waves only eight minutes after the torpedo struck. From the crew of 110, 64 men were lost during the sinking with the total likely to have been higher if the German U-boat commander had not radioed the position of sinking to the vessel’s base. Historians have termed this as a rare humane gesture in a time of war.

By the end of World War I in November 1918, it is believed Germany was responsible for sinking more than 5,000 merchant ships and around 100 warships.