Efforts to develop autonomous and remote control of ships are expanding, with a greater focus on highly congested ports and seaways as a proving ground for the technology. Recently, technology company ABB working with the Singapore shipyard of Keppel Offshore & Marine tested a remote control tugboat in Singapore. According to the companies, as one of the busiest seaports in the world, Singapore was one of the most challenging proving grounds for the technology.

The test to remotely control the tugboat in the port was carried out from a traffic control center in the Maritime and Port Authority's Maritime Innovation Lab. The test, which the companies called the first remote control with the joystick of a tugboat in Singapore, represented a validation of the increased safety and efficiency of towing operations with the help of digital solutions.

"We are proud to have reached another milestone that marks a significant step towards autonomous shipping, in close collaboration with Keppel," said Juha Koskela, Head of ABB Marine & Ports. “The purpose of this technology is to facilitate the crew with tasks that can be automated so that they can perform at peak times during critical periods and improve the overall safety and productivity of the marine operations. The test also confirms that this autonomous remote control technology can be applied to other types of vessels. "

ABB's and Keppel O & M's technology solutions were retrofitted to a 105-foot-long tug, the Maju 510. The vessel is owned and operated by Keppel O & M's joint venture company, Keppel Smit Towage. Equipped with the digital solution ABB Ability Marine Pilot Vision, the vessel had sensors that generated a digital awareness of the situation while the system performed the intelligent commands required for maneuvering and control.

The second phase of the project, which is planned for the end of 2021, involves the ship performing autonomous evasive maneuvers to avoid a collision under remote monitoring.

“Navigation with remote control is an important function for autonomous ships because it acts as a protection mechanism and is particularly practical in some complicated scenarios,” said Tan Leong Peng, CEO of New Builds, Keppel O&M.

Towing, in which a tug maneuvers other vessels by towing or pushing them, often in narrow ports, can be an extremely demanding task that requires the full attention of the crew, the operators said explaining their testing scenario. In addition, tugs often have to travel long and monotonous transit distances to get to their workplace. 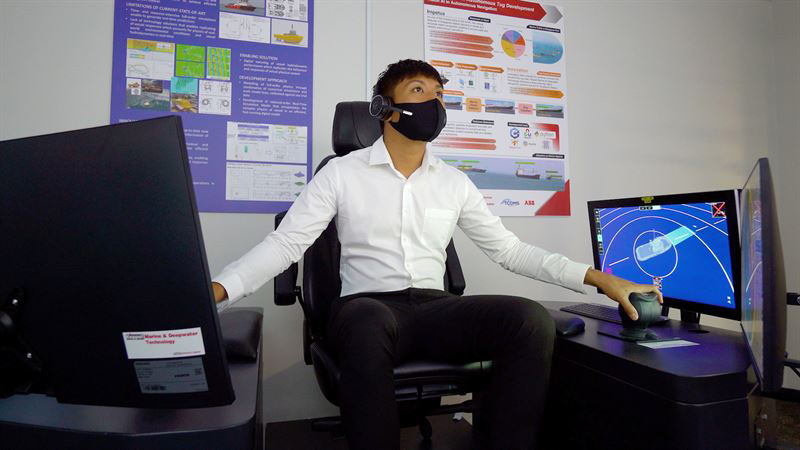 They highlighted the possible scenario in the future where the transit route is performed autonomously and under remote monitoring, while the crew on board can rest to be alert when it's time for the actual towing work. Holding the position with remote assistance can also provide opportunities for the crew on board to rest instead of performing routine tasks that can be performed as efficiently or with a remote crew.

“Keppel Smit Towage is pleased to be able to support Keppel O&M and ABB in the development of autonomous tugs. As a towing operator, we use the technology to improve our business and better serve our customers. With the tugboat Maju 510 as a test vessel, we can gain experience and provide feedback on how autonomous operations can help the tugboat captain and crew by simplifying navigation and thus be able to shift focus to the more important tasks. This has the potential to significantly improve operational reliability and efficiency,” said Romi Kaushal, CEO of Keppel Smit Towage.

The tugboat project in the port is being funded by the shipping and port authorities in Singapore as part of Singapore's Maritime R&D Roadmap 2030.