Despite the numerous reports suggesting that year-end holiday retail sales might be jeopardized by the backlogs and congestion across the global supply chain, the National Retail Federation is reporting that with retail imports expected to remain at near-record levels U.S. retailers have the potential to shatter previous sales records. The retail trade organization says that while container import levels are down versus a year ago, they remain strong and are on track for a projected 18 percent overall increase in 2021.

“There is considerable momentum heading into the holiday shopping season,” said NRF President and CEO Matthew Shay. “Consumers are in a very favorable position going into the last few months of the year as income is rising and household balance sheets have never been stronger. Retailers are making significant investments in their supply chains and spending heavily to ensure they have products on their shelves to meet this time of exceptional consumer demand.”

The congestion and disruptions that began in 2020 have continued through the current “peak season” for shipping the NRF highlights when retailers normally stock up for the holidays. They however are reporting that many retailers anticipated the challenge and began bringing in holiday goods months ahead of schedule to be sure sufficient inventory would be available. 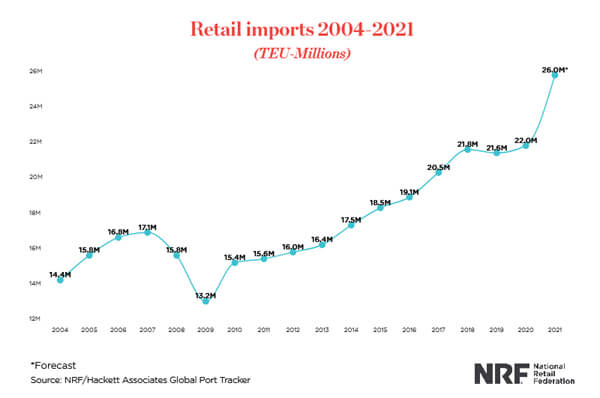 Despite a year-over-year decline in retail imports as measured in the volume of containers, the NRF notes that October was still among the five busiest months on record since the trade group began tracking imports in 2002. The year-over-year decline, which is expected to be just over one percent in TEUs arriving in October, would be the first since July 2020, after which unusually high import volumes began to arrive when stores closed by the pandemic reopened and retailers worked to meet pent-up consumer demand and to stock up for the holidays.

U.S. ports covered by the NRF’s Global Port Tracker are continuing to show retail import volumes ranging between 2.14 and 2.19 million TEUs each month. Busy cargo is expected to continue through the end of the year, with November forecast at 2.17 million TEU, up 3.3 percent year-over-year, and December at 2.18 million TEU, up 3.5 percent.

“Dockworkers are unloading ships as fast as they can, but the challenge is to move the containers out of the ports to make room for the next ship,” said NRF Vice President for Supply Chain and Customs Policy Jonathan Gold. “Retailers have enough inventory on hand to make sure shoppers won’t go home empty-handed this holiday season. But there are still items sitting on the docks or waiting on ships that need to make it to store shelves and online sellers’ warehouses.”

The National Retail Federation forecasts that holiday sales during November and December will grow between 8.5 and 10.5 percent over 2020 to between $843.4 and $859 billion. This compares with a previous high of 8.2 percent in 2020 to $777.3 billion and an average increase of 4.4 percent over the past five years. This year’s forecast includes a projected increase of between 11 and 15 percent for online and non-store sales.

For the full year, the Global Port Tracker is forecasting retail imports will have jumped 18 percent to a total of 26 million TEU arriving at the U.S.’s largest container ports. The NRF also expects the momentum will continue into 2022 with seven percent volume increases projected for January and February. TEU volume is forecast at over two million a month for the first quarter of 2022, although March 2022 is also forecast to be down four percent versus the prior year.