Royal Caribbean International has sold the two oldest and smallest cruise ships in its fleet. After months of rumors and denials about the fate of the 48,500 gt Empress of the Seas and the 74,000 gt Majesty of the Seas, the line now says that the two ships will depart its fleet later this month.

The company said that the ships have been sold to “an undisclosed party, based in Asia-Pacific,” that will release details for future sailings at a later time. Speculation is that they might be heading to China to expand that country’s domestic cruise industry. In recent months, both ships had been idle in the eastern Mediterranean.

“Empress and Majesty of the Seas made indelible marks on the cruise industry with their revolutionary design and size,” said Michael Bayley, president and CEO, Royal Caribbean International announcing the sale. “Saying goodbye to these two beloved ships is a major moment in Royal Caribbean’s history – one that is difficult but necessary. With plans for new, innovative ships to join our fleet in the upcoming years, we look forward to our guests and crew continuing to make new memories with us.”

Introduced in 1990 as the Nordic Empress, while she was not the largest cruise ship built, the Empress of the Seas played a pivotal role for Royal Caribbean. She was designed with the modern features of the company’s recently introduced Sovereign of the Seas, complete with a multi-level atrium and an extensive use of glass and modern amenities. Originally planned for a sister brand, Royal Caribbean took the ship over during construction and used it as their entry into the 3- and 4-day Bahamas cruise market.

The Empress of the Seas sailed for 18 years with Royal Caribbean mostly to the Bahamas as well as later cruising to Bermuda and the Caribbean. She also became the first cruise ship based at the new port in Bayonne, New Jersey, where Royal Caribbean opened a cruise terminal in 2004.

Renamed the Empress, she started sailing in 2008 for Pullmantur, the cruise line marketed in Spain. She returned to Royal Caribbean in 2016 and was the ship the line used to introduce cruises to Cuba. During the 2020 pause in operations, the Empress of the Seas was repositioned during the summer to the eastern Mediterranean, leading to the rumors that she was for sale. 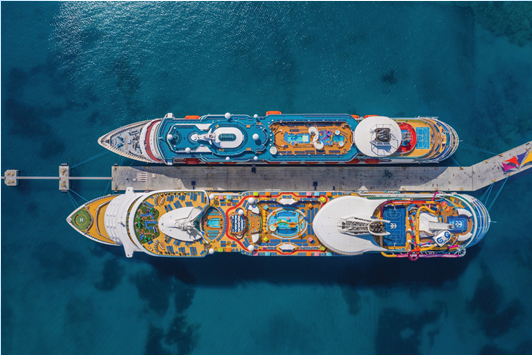 The Majesty of the Seas was introduced in 1992 as the third ship of the Sovereign class, at the time among the largest cruise ships in the world. She began her career operating 7-day Caribbean cruises and remained a popular ship in the fleet. Replaced by larger and new ships, later in her career she started running short cruises including trips to the Bahamas and Cuba. Plans had been announced for to follow her sister ships the Sovereign and Monarch operating for Pullmantur, but Royal Caribbean instead retained her in its fleet. Her sister ships, both continued to operate for Pullmantur till 2020 and were sold for scrap after Pullmantur declared bankruptcy during the summer.

Royal Caribbean Group reports that the decision to sell the two ships was part of an effort to continue to update its fleet. Carnival Corporation implemented a similar strategy in the summer of 2020 accelerating the sale of older ships that it had planned to retire from its brands.