Protestors from Greenpeace blocked the lock leading to the port of Amsterdam on Wednesday to call attention to their demands that the European Union should enact a stronger anti-deforestation law. Their protest was timed to block an 81,750 dwt bulker, Crimson Ace that was arriving with a cargo from Brazil, one of the countries the protestors contend is being most harmed by deforestation.

They reported that more than 60 protestors met at the Ijmuiden lock gate which leads into Amsterdam at around midnight on May 11. Climbers went onto the lock gate with some suspended from the lock. They also hung a giant banner reading, “EU Stop Nature Destruction Now.” Other activists took to the water in front of the lock in small boats carrying banners and placed large inflatable cubes in the path of shipping displaying their messages. Greenpeace’s 108-foot sailing ship Beluga II was also positioned in the waterway displaying banners as well. 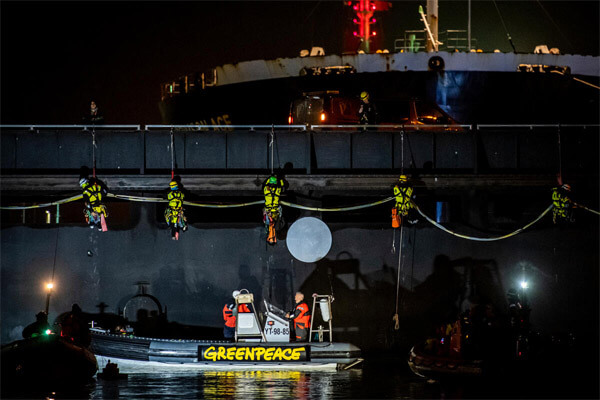 “Hundreds of ships carrying soy for animal feed, meat, and palm oil come to our ports every year. Europeans might not drive the bulldozers, but through this trade, Europe shares responsibility for clear-cut felling in Borneo and fires in Brazil,” said Andy Palmen, director of Greenpeace Netherlands. “We will lift this blockade if Minister van der Wal and other EU ministers publicly announce that they will fix the draft law to protect nature from European consumption.”

The protestors were targeting the Singapore-registered bulker Crimson Ace. The 751-foot vessel was completing a voyage than had begun in Brazil on April 18 loaded with a cargo of 6,600 tons of soy. The vessel was held at the lock as part of the protest.

“The mega-ship Crimson Ace is part of a broken food system linked to nature destruction. The vast majority of all soy disappears into the feed troughs of our cows, pigs, and chickens,” said Palmen. “There’s a draft EU law on the table that could end Europe’s complicity in nature destruction, but it is far from being strong enough. We’ll keep pressuring them to turn the proposal into a solid, watertight law.”

The protesters blocked the lock gate for 18 hours before the police ended the demonstration. A total of 11 protestors were taken into custody including eight of the climbers and three from the boats. 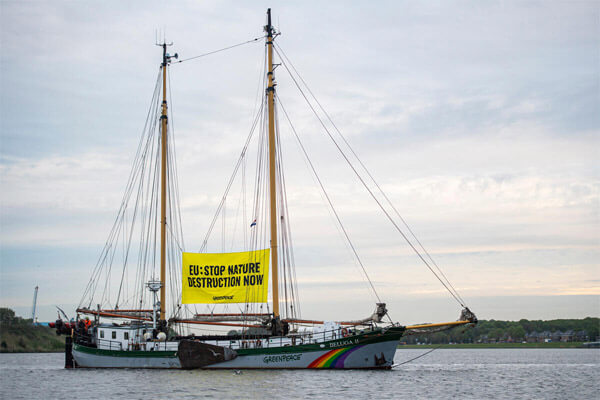