Examination of global ship tracking data for the last two years has shown several instances of multiple vessels reporting their locations as being on land at airports far from where the ships were operating off shore.

“We first became interested in this problem in June when a vessel master in the Black Sea reported his GPS showing him to be at the Gelendzhik airport, about 25 miles from his real location,” said Dana A. Goward, President of the non-profit Resilient Navigation and Timing Foundation. “He provided photographs of equipment and other information that convinced experts his GPS receiver was being deliberately spoofed.”

About 20 other vessels in the area were reported to be similarly affected.

“Spoofing” a GPS receiver is the intentional transmission of false GPS signals to cause it to provide incorrect time or location information. “Jamming” is blocking reception of GPS with stronger signals and is easier and more common than spoofing.

“In July, we followed-up on the June report and found evidence that, for some in the Black Sea, GPS signals were still being periodically disrupted. We then contacted Windward Ltd., a leader in maritime data and analytics to investigate further,” said Goward.

“Because we see the same disruption patterns in multiple vessels and in specific areas, it appears that the issue is GPS rather than AIS disruption and is therefore likely to affect everything in the area, not just ships,” said Matan Peled, Co-founder of Windward.

“Most interestingly, all three locations involve airports - Gelendzhik Airport and Sochi International Airport near the Black Sea, and St. Petersburg Airport near the North Sea. Windward also found that some of the vessels that mistakenly appear in Sochi Airport were really located near Gelendzhik, about 200 kilometers (124 miles) away. Even yesterday, the 25th of September, two vessels appeared at Sochi Airport, 20 kilometers (12 miles) from their actual positions near the Sochi harbor,” said Peled.

“These incidents dovetail with reports that people in downtown Moscow often find their GPS receivers placing them at Moscow’s Domodedovo airport, about 25 miles away,” said Goward. “We don’t know where all these false signals are coming from, or the motivation behind them. From a safety perspective, it is fortunate that they seem to be providing obviously false information. Most people probably realize right away their equipment is not working properly and ignore it. More subtle errors caused by spoofing could lead to tragic accidents.”

While spoofing GPS takes more sophisticated equipment than jamming, the equipment is readily available. In 2015 a Chinese researcher at a hacker’s convention provided step by step instructions to build a spoofing device and sold kits for $300. Readymade “GPS signal generators” are now available on the internet and are very popular with Pokemon-Go enthusiasts. They are used to trick cell phones into collecting rewards from remote locations without having to physically be there.

“The real lesson from all of this,” according to Goward, “is that GPS signals can be easily spoofed. Users should beware and take precautions.”

One precaution users might take while in Russia and some other parts of the world is using GPS signals in combination with terrestrial Chayka/Loran-C. The land-based electronic navigation system operates at very high power and is nearly impossible to disrupt. Russia, China, South Korea, Saudi Arabia and India operate such systems. The United States has said it will build an eLoran system, and eLoran is reportedly being considered by the United Kingdom and others. Combination GPS/eLoran/Chayka receivers are available from a limited number of suppliers. 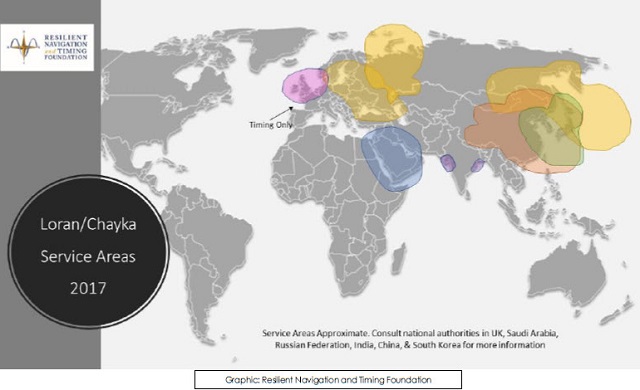