Last week, after a coordinated social media campaign to raise support for an anti-wind-farm movement, a flotilla of French fishing vessels surrounded the offshore support vessel Aethra at a position near the future Saint-Brieuc wind installation.

The Aethra was off the coast of Brittany, conducting repair work on electrical cables for connecting the future wind farm to the shoreside grid. She reported the disturbance, and French maritime agency Premar Atlantique mobilized the patrol boat Trieux and the Marine Nationale training ship Lion to the scene.

The responders found the flotilla of fishermen engaged in a range of illegal acts, including failure to comply with the prefecture's orders governing the work on the wind farm; navigating into the designated work area; approaching within 500 meters of the working vessel; violating COLREGs by making dangerous maneuvers in proximity to the vessel; firing distress rockets at the vessel; and making verbal threats of boarding and sabotage - specifically, propulsion sabotage - against the Aethra. 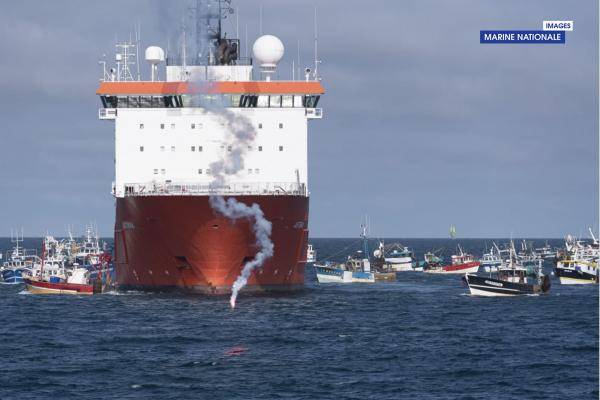 Surrounded by hostile fishing vessels, the OSV's captain decided to halt work and temporarily depart the scene in order to reduce tensions and protect his crew.

The protest began at about 1000 hours and broke up shortly before 1200. On their return to the quay, the fishermen who had engaged in the protest were met by officers of the maritime police investigation brigade. The Brest maritime prosecutor's office has begun its first hearings on the alleged violations.

The 500 MW Saint-Brieuc installation is Iberdrola's first offshore wind farm off Brittany. Van Oord has been contracted to carry out pile and turbine installation using the WTIV Aeolus, and Iberdrola's marine subsidiary is conducting subsea cable installation. All cables will be buried to permit fishing to continue in the area.

It is the latest in a string of confrontations between Breton fishermen and Iberdrola's contractors. Local fishermen believe that the 62-turbine project will destroy access to a prime scallop fishing site, and they have threatened to engage in "unprecedented confrontations" if necessary to prevent its completion. In December, France's Council of State ruled against a lawsuit filed by fishermens' groups, ending an appeals process and paving the way for the project to proceed.

Direct action has been a prominent part of the campaign for more than a year. In May 2020, fishing vessels attempted to blockade a survey vessel at the site, and recently they have mobilized to protest the operations of the Aeolus. Iberdrola maintains that the wind farm is sited away from the most lucrative scallop-fishing area in the bay, and that fishing will still be permitted between turbine rows.

In mid-June, work on foundation installation at Saint-Brieuc was temporarily suspended due to a discharge of biodegradable hydraulic oil from the Aeolus' equipment. The source was a leaking hydraulic connection, and Aeolus has returned to her home port in the Netherlands for inspection and repairs.