Felixstowe and Union Agree to Two-Year Wage Deal for Dockworkers

The operators of the Port of Felixstowe, the UK’s largest container port, and Unite the Union confirmed that dockworkers at the port have accepted a new two-year contract adverting the threat of further strikes at the port. Both sides welcomed the deal with the union calling the terms significant and Hutchison Ports owners of Felixstowe noting it was the earliest that the annual pay review had been settled and cleared the way for the stevedoring contract negotiations with shipping lines.

Unite had staged two strikes against the Port of Felixstowe, each lasting eight days, in August and September effectively closing the port’s container and Ro-Ro operations. Approximately 1,900 dockworkers and other employees struck primarily for higher wages. Major shipping lines diverted ships mostly to ports on the European continent planning to transship containers after the strikes but some vessels found themselves stuck at the dock in the UK during the strikes.

The union demanded a pay increase that exceeded the rate of consumer inflation in the UK which was then about 10 percent. Felixstowe offered a seven percent increase which the union said was effectively a pay cut due to the rate of inflation. After the second strike, however, the union said it was optimistic that the dispute could be resolved through negotiations.

Unite reports that the terms of the two-year agreement called for a seven percent wage increase retroactive for 2022 and an additional one-off payment of £500 ($619). For 2023, the wage increase rises to 8.5 percent plus a further one-off payment of £1,000 ($1,240). Striking workers at Liverpool settled their wage dispute recently with a nine percent wage increase or a total value according to the union of between 14 and 18 percent based on job grades and one-time payments. The union said the total value of the Felixstowe agreement, which was accepted by 90 percent of members in a vote, would be 15.5 percent.

Robert Ashton, Chief Operating Officer at the Port of Felixstowe, said in a statement that the agreement “provides welcome certainty and stability at a time when our employees, like everyone else, are facing an increase in the cost of living." 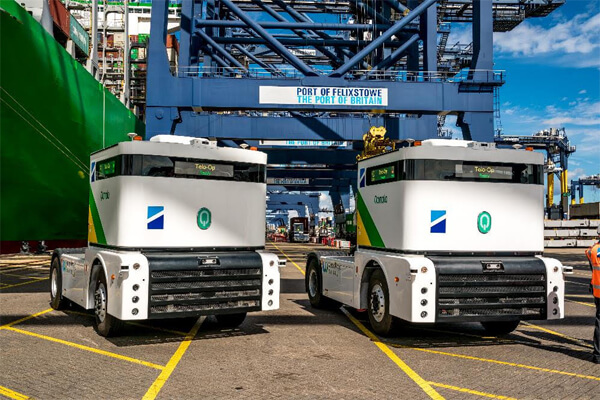 Both in the UK and earlier in 2022 port workers in Germany struck based on wages as opposed to the ongoing U.S. West Coast labor talks which are believed to center on the role of automation in the ports. The same day Felixstowe confirmed its union agreement the port also highlighted the introduction of new automation at the port.

They said they believed Felxistowe was becoming the first port in Europe to introduce two battery-powered autonomous terminal tractor units (ATs) into mixed traffic container terminal operations. The autonomous trucks use a digital map which is loaded to a fleet management system that controls the navigation around the port. They combine that map with its onboard GPS navigation to track its real-time position. The autonomous trucks use LiDAR, a light sensing technology that creates a 3D map of the area around the truck using a laser and receiver, which combines with its onboard 360-degree cameras

“These new autonomous trucks represent a significant technological step forward for the Port of Felixstowe,” said Clemence Cheng, Chief Executive Officer at the Port of Felixstowe. “The tools underpinning port operations have evolved continuously and we already have a range of very advanced systems and equipment in place but this is the first time we will have wholly driverless vehicles.”