The future USS Lyndon B. Johnson, the third and last of the futuristic Zumwalt-class destroyers, launched Sunday at General Dynamics Bath Iron Works. Delivery is set for 2020.

The Zumwalt's design dates to the early 2000s, and it was intended to be a great leap forward for naval technology and firepower. However, its cost reduced the Zumwalt's attractiveness, and the program was gradually cut from 32 planned vessels down to three. The total program cost for the class is roughly $22 billion, including R&D, for a total distributed cost of $7.5 billion per vessel. The Lyndon B. Johnson will be somewhat less expensive than her sister ships because she has a steel deckhouse rather than a specially-fabricated composite structure.

The Zumwalt class was envisioned as a stealthy platform for shore bombardment, and to fulfill this mission, two Advanced Gun System (AGS) cannons occupy the deck forward of the house. While sophisticated, these units are inoperable due to the cost of their specially-designed ammunition. As the program was scaled back to three ships, the price per shell (including production tooling and engineering costs) rose to about $1 million per unit, beyond the U.S. Navy's means. The 155mm AGS cannons cannot accept standard 155mm artillery rounds, and the Navy has not yet identified an alternative form of ammunition. In a recent hearing before the Senate Armed Services Seapower subcommittee, top Navy requirements officer Vice Adm. William Merz raised the possibility that the service may remove the AGS gun system altogether in future years.

Instead, the Navy is downgrading the Zumwalt's ground attack mission and improving its abilities in a surface-to-surface role. It is equipping the class with the new long-range SM-6 missile, which is capable of both surface-to-air and surface-to-surface attack, along with the anti-ship version of the venerable Tomahawk cruise missile. 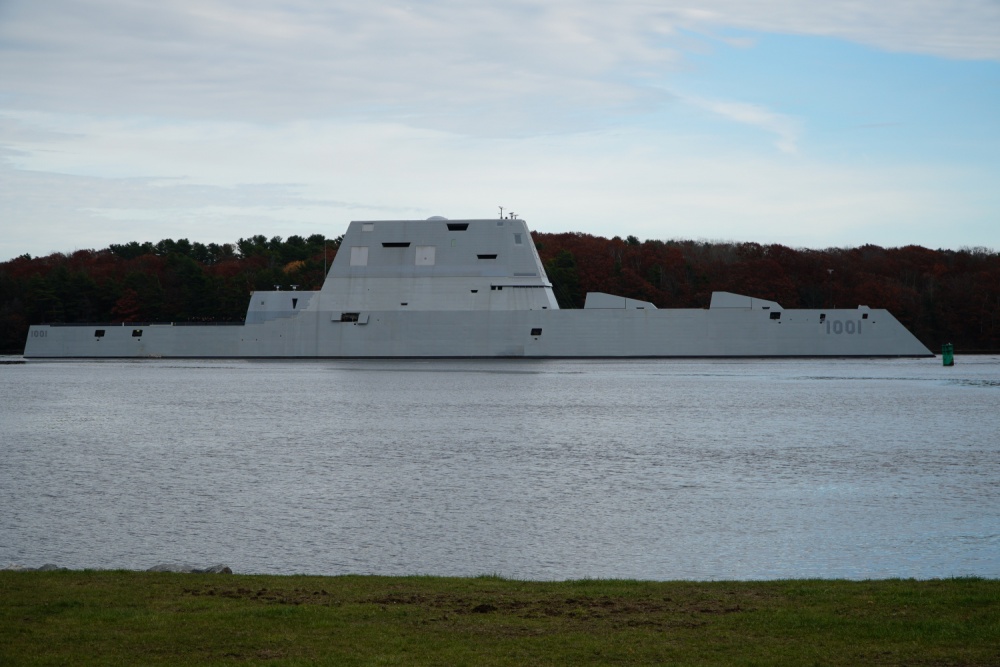 The second Zumwalt-class hull, the USS Michael Monsoor, arrived in San Diego on December 7 after a transit of the Panama Canal. She will be commissioned on January 26, and will then enter a test and evaluation period.

The Monsoor and the first-in-class Zumwalt suffered several serious engineering casualties post-delivery. The Zumwalt had to make two unscheduled port calls due to propulsion issues during her transit to the Panama Canal, then lost power in one of the canal's locks. She completed the canal transit under tow. Separately, Bath Iron Works had to replace one of the Monsoor's turbine engines after serious blade damage was discovered during sea trials.

Bath Iron Works continues to produce Arleigh Burke-class destroyers, the workhorses of the surface fleet. In November, the yard cut first steel for the 77th vessel in the long-running class, and it has four more Arleigh Burkes in various stages of construction.

Tropical Storm Beta is set to become the third named cyclonic storm to make landfall on the U.S. Gulf Coast in a month and the ninth named storm to arrive on U.S. shores this season. The World Meteorological Organization has run out of its list of names for tropical storms this year, and it has transitioned to using the letters of the Greek alphabet.  Beta was hovering slowly in the U.S. Gulf of Mexico Sunday afternoon, but it is expected...