The master of the APL England appeared in court in Australia to face charges related to the loss of containers from the ship during an incident on May 24 southeast of Sydney, Australia. At the same time, the ship’s operators also issued statements acknowledging the accident while defending the actions of its crew.

Two charges were brought against the master. Under the Section 26F of the Protection of the Sea (Prevention of Pollution from Ships) Act of 1983, the charges are for discharging of garbage into the sea, and under Section 141 of the Navigation Act 2012 the master is charged with not ensuring that the vessel did not pollute or damage the marine environment. These charges carry maximum penalties of over A$300,000, with the case currently scheduled to be heard in the Brisbane Magistrates Court on June 12.

In its statement acknowledging the loss of the containers, ANL said, “Through the height of this storm, the crew of this vessel leveraged their training and navigational skills to maneuver the container ship into safety. This was an unnerving event, even for seasoned maritime professionals, and the captain and the crew have ANL’s full support.”

The ship’s operator has hired two companies, Varley Group and Avcon Projects, both of with experience in environmental clean-ups, to remove debris and containers that reach the coast as well as to tow any floating containers that can be located to shore. 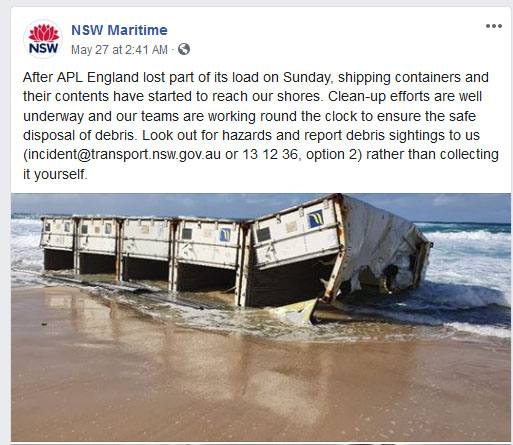 Image of containers on shore from NSW Maritime/Facebook

Residents and the local authorities, however, also continued to report debris in the waters off the Australian coast and coming on shore at local beaches. NSW Maritime reported that so far 14 of the approximately 50 containers that went overboard have been secured along with a large quantity of debris. An aerial survey of the coast identified the areas where debris remained and reported that one container was seen washing up on the rocks along the shoreline and was breaking apart.

“ANL is committed to maintaining high environmental standards throughout its operations and we apologize for any inconvenience caused,” the company said in its statement. “ANL continues to work closely with the relevant authorities to retrieve cargo which fell overboard where feasible.”

Off-loading of the remainder of the damaged containers has begun in the Port of Brisbane, where the APL England remains under detention. The vessel will not be released until the deficiencies that were identified by the Australian Maritime Safety Authority (AMSA) are rectified.

ANL said it would cooperate fully with AMSA’s ongoing investigation into the accident.