The world’s largest cruise ship, the Icon of the Seas, currently under construction in Finland for Royal Caribbean International was moved from the construction dry dock to the fitting out basin on Saturday, December 10 after having been floated for the first time the prior day. Assembly of the ship, which is estimated at 250,800 gross tons, began more than eight months ago and she will spend another year fitting out by Meyer Turku before she enters into service.

"Icon of the Seas is a state-of-the-art ship that challenges the know-how of our shipyard and raises the entire Finnish shipbuilding industry to a new level,” said Tim Meyer, CEO of Meyer Turku. “We are proud to be responsible for the design and construction of Icon of the Seas in cooperation with the customer and all our partner companies. This is also a significant step for the sustainable development of the shipbuilding industry."

The massive cruise ship will be about six percent larger in volume than the current largest cruise ship in the world, Royal Caribbean’s Wonder of the Seas. which entered service in the spring of 2022. While its double occupancy passenger capacity is slightly smaller at 5,610 passengers, because the Icon of the Seas is designed for more family cruising it will have the largest maximum passenger capacity at 7,600 people with a further 2,350 in crew. 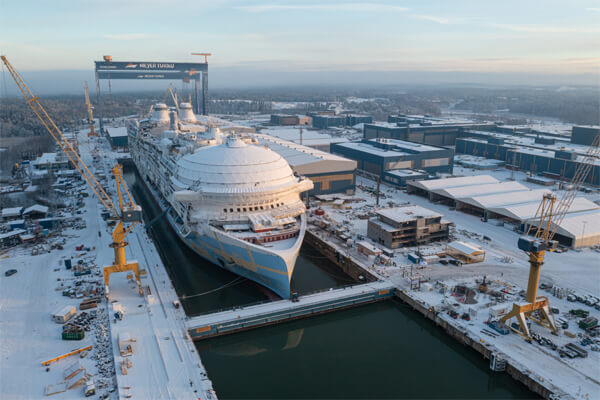 Outfitting of the Icon of the Seas will continue for approximately a year before her handover to Royal Caribbean which is scheduled for late in 2023. First sea trials however are projected for May 2023. Her maiden voyage is scheduled for January 2024 from Miami.

"The float out of a new ship is a defining moment, and in the case of Icon of the Seas, it marks the next step in the start of a new era of vacations,” said Michael Bayley, president and CEO, of Royal Caribbean International.

Among the amenities that the shipyard will be completing are 2,805 passenger staterooms as well as public spaces which will be spread across eight “neighborhoods,” ranging from entertainment zones to an area dedicated to children and a suite zone for the deluxe accommodations. Amusements for the passengers will include a new unique domed area at the front of the ship as well as six water slides, seven pools, and nine whirlpools. The cruise ship will have the largest water park at sea and a total of 40 bars and restaurants.

In addition to being the world’s largest, it will be Royal Caribbean International’s first cruise ship powered by LNG and will incorporate new levels of sustainable technology. The six LNG-powered engines provide 67,500 KW of energy to run the ship and there will also be one of the first fuel cell systems aboard a cruise ship. The hull is also outfitted with an air lubrication system to reduce friction and the ship’s systems include waste heat capture capabilities to harness and repurpose excess engine heat. The ship is shore-power ready and has advanced wastewater treatment systems while Royal Caribbean is committing to either reuse waste or send it to a waste-to-energy facility. Machine-learning technologies will optimize the vessel’s routes for maximum operating efficiency.