The Norwegian government announced on Wednesday its plans for a major new round of renewable offshore energy development which will also be the first in the southern North Sea area designed to provide electricity to southern parts of the country. The government is moving forward with the southern project as well as its plans for floating offshore wind in the northern reaches of the North Sea, saying that its goal is to establish a model for allocating land at sea with these auctions.

The government envisions at least three phases with the previously announced Utsira North project off the west coast developing 1.5 GW of power. Because the Utsira North sites will have an average depth of 875 feet, the plan is for the development of floating offshore wind turbines. The newly defined southern areas, Southern North Sea II which are located in between Norway and Denmark, would each be 1.5 GW projects. They will be at a more standard average depth of 200 feet likely using fixed-bottom wind turbines. Each phase of the southern project would generate approximately 7 TWh a year, equal to power for approximately 460,000 households. 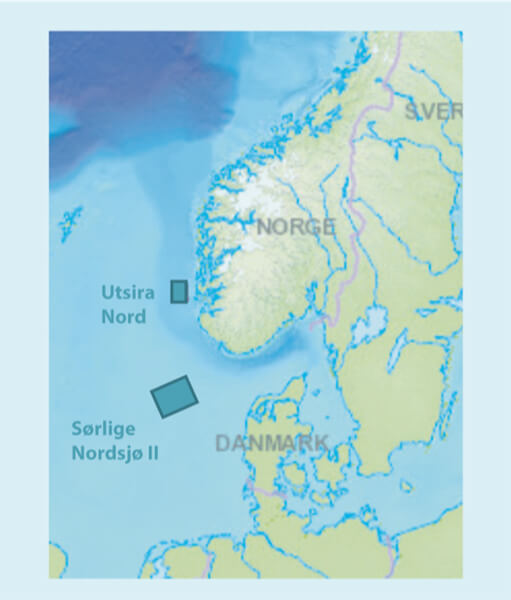 The first portion of the southern project would be connected to the Norwegian mainland by an undersea cable. However, the government said it would study the possibilities for the second phase which would be to the south of the first phase. Among the options mentioned would be connecting the power to provide international connections. They noted that no new international connections have been made and this would be an opportunity to increase export capacity from Norway.

The Prime Minister of Norway, Jonas Gahr Støre said that goal is to meet the increasing demand for affordable electric power while also contributing to the development of the technology and Norwegian industry and creating cost reductions for the power supply.

The government also insists that the next auctions will be a main model for allocating land for future renewable energy production at sea. They are developing the auction model while also planning regulatory changes for the auction solution and area allocation process.

The Ministry of Petroleum and Energy is currently submitting for consultation a proposal for the division of the area within the announced Utsira North and the Southern North Sea projects. They said the division takes into account both environmental values and coexistence with other business interests and that they will seek input from the offshore wind industry, other users of the area, and other interested parties on any adjustments to the area.

They are also beginning the impact assessment program for the proposed areas. The assessment program is expected to take up to 12 months and must be carried out as the next step in the process. At the same time, the prime minister and the government are also seeking to identify further areas for the development of offshore renewable energy.