A new concept for a one-hundred-year minimum life concrete jacket foundation has been designed for offshore wind turbines.

Andy Filak, Principal of AMF Concepts, says that one of the major hurdles to the development of offshore wind farms has been the development of reliable foundation systems with long life and ease of installation in deepwater. Current concrete technology is not robust enough for the long-term exposure that is experienced in an ocean wind farm, he says, and steel technologies require complicated shoreside construction and at-sea installation involving multiple large crane barges and anchor handling tugs.

Filak says his new composite concrete material (geopolymer cement) and a new catamaran ocean going deck barge design solve both issues. The concept involves changing the composition of the cement binder typically used in the U.S. and included a non-metallic reinforcing structural frame. The geopolymer cement binder is made up of four inexpensive and widely available components: Type-F fly ash, fresh water, waterglass (sodium-silicate), and lye (sodium-hydroxide). With the type-F low calcium fly ash, the binder can have as little as two percent calcium, producing a salt-resistant material.

To replace the steel rebar, a nonmetallic bar made from readily available basalt is used for reinforcement. Basalt stone is found all over the earth and is a key component enabling the one-hundred-year durability of the jacket structure.

The current construction and deployment of a jacket foundation (approximately 200 feet high and weighing approximately 1,000 tons) consist of steel fabrication in a quay side yard, lifted with a heavy lift crane onto a barge for tow out with tugs. These tugs also act as anchor handling tugs for final positioning the jacket in the wind farm. A high capacity crane vessel is then required to place the jacket in the wind farm.

“All of these operations have long open water residence time and are significantly affected by ambient sea states,” says Filak. “There is an alternative to this construction and deployment that will substantially reduce port to site cost and time.” He says that slip forming where concrete is poured into a continuously moving form that uses a heat cured formwork to achieve a two foot an hour slip would see a jacket completed in under four days.

The cost to slip on land and make the heavy lift onto a barge is uneconomical, Filak says. He has therefore designed a self-propelled catamaran ocean going deck barge that serves as a construction platform as well as a transportation and deployment platform. With the barge moored to the quay with ready access to materials and resources, jackets are slip formed at each end.

When the jackets' substructure construction is complete, the barge is powered out with its own propulsion to the windfarm site with both two jackets on board. The catamaran barge's is 420 feet in length with a beam of 200 feet and a depth of 27 feet. This results in 52,100 square feet of deck area. At the site, the dynamically positioned barge is used to position the jacket over the pre-pile center and then lowered, with its liner winches, over the piles to the seabed where it will be leveled and grouted.

An alternative floating concept offers the potential to capture the deepwater offshore wind generator market due to its significant cost savings, says Filak. The concept is to slip-form the substructure (spar buoy) at one end of the barge and to assemble the turbine at the other end with the barge tied quayside. The components are then transported and deployed at the deepwater site using the same processes and equipment. Filak says the delivery of a fully-assembled wind turbine generator to a deepwater site can be achieved for the turnkey price of $5.8 million, a fraction of current floating foundation costs. 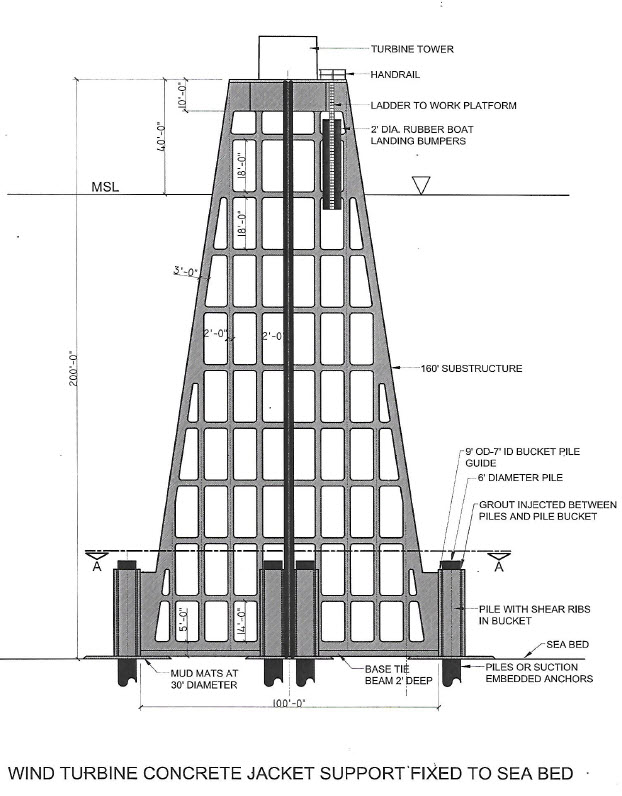