A new monument to commemorate the 80th anniversary of the Dalfram Dispute was unveiled at a ceremony in Wollongong, Australia, this week.

Australia's Waterside Workers' Federation had begun a nationwide campaign of militant action in response to Japan's invasion of China in 1937. Workers argued that scrap metal being sent to Japan was being used for war purposes against the Chinese and in particular, against the civilian population.

Melbourne wharfies refused to load scrap iron on to a German ship in May 1938, and on November 15, 1938, the British tramp steamer Dalfram berthed at No. 4 jetty in Port Kembla, Wollongong. Mitsui, the controlling company for Japan Steel Works, had chartered the vessel to take pig-iron from Port Kembla to Kobe, Japan.

Ted Roach, then Branch Secretary for the Waterside Workers’ Federation, addressed the men at the labor pick up for the Dalfram. He told them of the destination of the pig iron and what he believed to be the uses the Japanese would make of it: bombs - first against the Chinese and eventually against Australia. In protest, the men walked off the ship declaring they refused to load pig iron for Japan to turn into weapons.

The action went against the Federal Lyons Government’s endorsed contract to provide 300,000 ton of pig iron to Japan. The Government ordered the wharfies back to work, but they refused.

Speaking at the ceremony, Maritime Union of Australia  Branch Secretary Garry Keane said no-one could believe the community support for the decision. “They shut down the steel works for 11 weeks across Christmas and put around 4,000 people out of work. The intention was to put pressure on wharfies, but it had the opposite effect – the dispute got bigger and bigger.

The Government had underestimated not only the wharfies but their families and community as well. A picket was established at the wharf, and a women’s committee organized donations of food and rallied support for the strikers’ families. The Chinese community provided truckloads of produce from the Sydney markets, and local farmers also donated fresh food. Support for the stand against aggression poured in from the public and other unions from throughout Australia and internationally.

The Lyons Government accused the Waterside Workers' Federation of trying to dictate Australia’s foreign policy and implemented what became known as the “Dog Collar Act” - a new licensing system to try to stop wharfies from striking. Only one license was issued, however, and that was ceremoniously burnt on the stairs of the Wollongong Town Hall.

The lockout lasted for 10 weeks and two days, during which time Attorney-General and future Prime Minister Robert Menzies went to Wollongong to try and end the gridlock. Menzies was met by an angry crowd, and it was there he was awarded a new nickname after a woman in the crowd heckled him with “Pig Iron Bob.”

Shortly after his visit, the Government said there would be no more steel sent under the contract to Japan. “This was a dispute run on moral grounds – a social and moral dispute in support of the Chinese people who were being massacred,” Keane said. “This was also a protest against a war we knew was coming. It is an incredible legacy."

The 80th anniversary event was attended by current and past Maritime Union of Australia members and officials, politicians and guests from the Chinese consulate and local community. 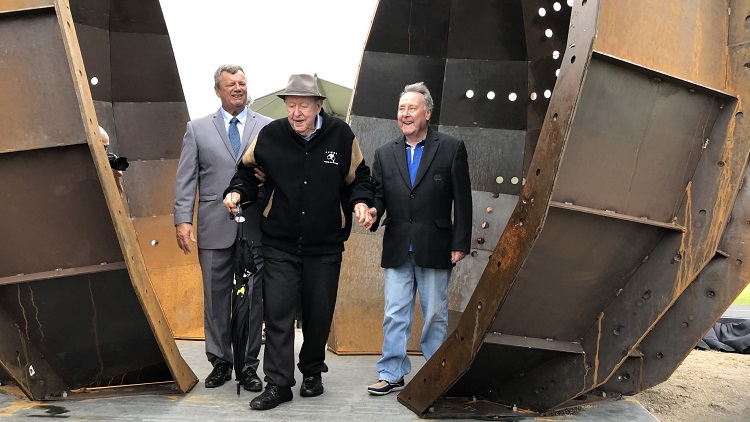 It's calf season in Ireland. It's actually calf season in Ireland all year round, but the bulk of the two-week-old, unweaned calves sent to Europe's veal industry are shipped between February and April. The calves are separated from their mothers at birth. They are all male, taken from the dairy industry and loaded on to trucks which then board ferries for Europe.  A typical ferry journey from Rosslare in Ireland to Cherbourg in France on a ro-ro ferry takes around...