First Steel Cut for Celebrity Beyond

First steel has been cut for Celebrity Beyond, the third ship in the Edge Series from Celebrity Cruises, at the Chantiers de l'Atlantique shipyard in Saint-Nazaire, France.

With the second-in-class Celebrity Apex set to arrive in Southampton in April 2020, the brand expects delivery of Celebrity Beyond in fall 2021.

Royal Caribbean Cruises Ltd. ordered a fifth Edge-class ship in April last year, with delivery scheduled for fall 2024. Both Celebrity Edge and Celebrity Apex are built with a gross tonnage of 130,818 GT. Future newbuilds are expected to have a hull expanded by 20 meters to 327 meters, and an increased gross tonnage to 140,600 GT. The ships are reported to cost around $1 billion each. 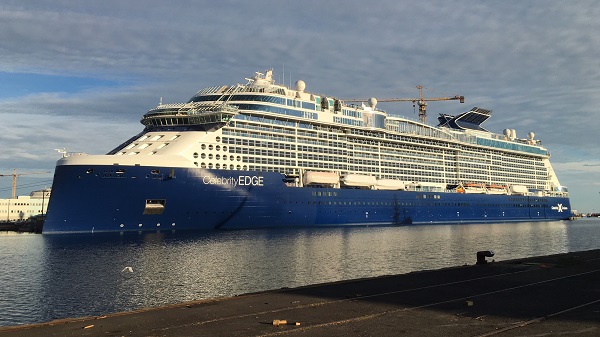 Three ships operating in different parts of the world are all reporting cases of food poisoning among their crew. At least two crew members have died while others have been transferred from their ships and hospitalized. It might be coincidental or an outbreak of the more common norovirus, a common gastrointestinal disease, but it rarely causes deaths. The Ministry of Foreign Affairs in the Maldives reported the first cases at the beginning of February. A 22,641 dwt Thai bulk carrier,...

[Brief] The Indonesian Navy successfully intercepted five pirates in the middle of a theft aboard a barge in the Singapore Strait.  The suspects allegedly boarded the barge Linau 133 as it was under tow by the Malaysian tugboat Danum 50 off the Riau Islands. At about 1220 hours, the Indonesian Navy vessel KRI Siwar-646 was under way on a routine patrol near Karang Banteng (Buffalo Rock), her crew spotted suspicious activity aboard the barge. Three people appeared to be transferring wire rope...

Samsung Heavy Industries has agreed to settle allegations of corruption in connection with the sprawling Petrobras bribery investigation, paying a fine of $150 million in an agreement with Brazilian prosecutors.  The allegations centered on an order for three drillships that Petrobras placed with SHI in 2006-2007. When Brazilian prosecutors began digging into the so-called "Lava Jato" bribery and money-laundering scheme at Petrobras in 2014, they found evidence that a shipbroker for the drillship deal had used a portion of his...