Construction is getting underway on PortMiami’s fourth new cruise terminal and following the recent trend the new terminal will feature distinctive architecture to make it a notable addition to the port and Miami skyline. The new terminal, which is a partnership between MSC Cruises and PortMiami, will also become the largest cruise ship terminal in North America when it is completed in late 2023.

The groundbreaking ceremony was held at PortMiami on March 10 for the terminal that will cost an estimated more than $380 million. According to MSC Cruises and Fincantieri Infrastructure, which is responsible for the construction, the project represents one of the largest investments recently made in the United States by an Italian-led multinational corporation like MSC Group.

According to the Miami Herald, when the Miami-Dade commission approved construction of the terminal in April 2019, MSC agreed to a 50-year lease on the land which is located at the eastern end of Dodge Island beyond the area previously devoted to the cruise ship terminals. Miami-Dade committed to $8 million in infrastructure improvements at the site to support the development of the terminal, but MSC is responsible for any dredging. MSC pays no rent in the first year of the agreement and then rent starts t $15.2 million in the second year and increases by three percent annually for 30 years. MSC also pays just over $6 per passenger if the passenger count exceeds 2.5 million people in a single year. 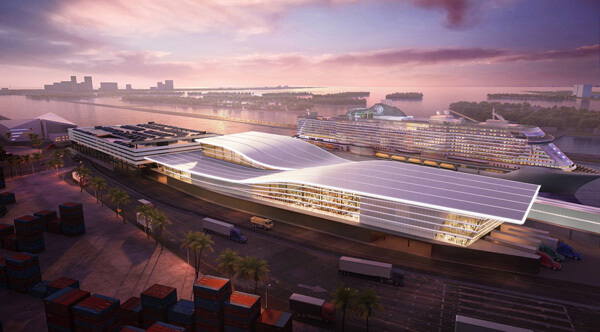 The terminal will incorporate 490,000 square feet over four levels and can accommodate 36,000 passengers per day. The terminal will have three berths, two of which MSC will build measuring 2,460 feet in length and the third berth which will be built by Miami-Dade and will be available to other cruises lines. MSC notes that the terminal is designed to accommodate its largest cruise ships including the LNG-fueled 208,000 gross ton ships currently under construction in France. The terminal was designed by Arquitectonica and includes the latest in environmental technologies in addition to its unique external appearance.

Among the elements that are being incorporated into the terminal will be office spaces and a multi-level parking garage to accommodate 2,400 vehicles. It also has dedicated loading and unloading areas and entrances and spaces reserved for suite passengers. Infrastructure improvements include roadways and the terminal will be designed for shore power for the cruise ships. The introduction of cold ironing however is depending on the development of the power grid in Miami to support the vessels using shore power.

The MSC terminal known as Terminal AA joins other signature facilities added to PortMiami. Royal Caribbean Group built the first of the modern terminals, which is located next to the site for the new MSC terminal. Norwegian Cruise Line also built a signature terminal that went into operation last year when cruising resumed and recently PortMiami opened Terminal V at the western end of Dodge Island built for Virgin Cruises. This week, PortMiami also celebrated the topping out of Terminal F, which is being rebuilt for Carnival Cruise Line. 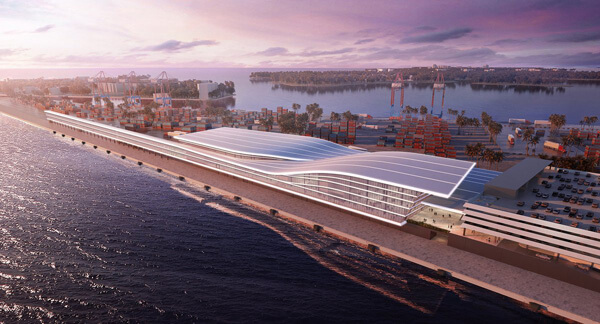